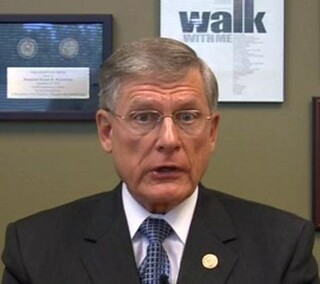 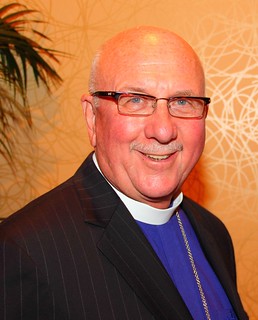 Yesterday both former Synod President Gerald Kieschnick and current Atlantic District President David Benke made public comment on the Newtown situation, Kieschnick in his “Perspectives” column and Benke in an article in the New York Times.

In his column, Kieschnick writes:

“Some who read this article may know what I mean when I say this sounds like Yankee Stadium in Newtown, Connecticut. In both cases, the pastor in question was simply responding in a pastoral way to people in need of healing and hope. He did so without in any way compromising the truth of what we believe, teach and confess.

“I say now what I said over 11 years ago. If a Lutheran pastor is invited to pray in a public gathering and declines that invitation, he yields the platform, the microphone and the message to those whose witness to Christ and his redeeming love may, in some cases very possibly and in other cases undoubtedly, not be nearly as clear as our pastor’s would have been.

“Our witness to the truth needs to be given to people who know not the truth. For that to happen, we must speak that witness in places where people who need to hear the truth are present. That may very well include other speakers who are present in those places.

“To the question whether it is OK for a Lutheran pastor to pray publicly in circumstances such as just described, my perspective is: Absolutely! Anytime! Anywhere! In the presence of anyone! Like Peter and John in Acts 4, we cannot help speaking about what we have seen and heard, even if it means persecution or imprisonment!”

Former President Kieschnick further demonstrates why it is a good thing he is the former president. His arguments are lacking in theological acumen, to say the least. He presents the situation as simply a matter of a pastor being “invited to pray in a public gathering.” He neglects to mention that the “public gathering” in question is an interfaith prayer service, with all that comes with it. A “witness to Christ and his redeeming love” cannot be “clear” in that context without violating the unwritten contract that accompanies every invitation to participate in an interfaith service, namely, that no participant may present his religion as the only hope, to the exclusion of the others. Therefore the very nature of interfaith services precludes a clear, unambigious witness to Christ as the one and only hope of salvation.

Further, the biblical examples that former President Kieschnick cites actually work against his case. To do what Elijah did at Mount Carmel (1 Kings 18) would mean mocking (at a minimum!) the futile efforts of the ministers of false gods: “Cry aloud, for he is a god. Either he is musing, or he is relieving himself, or he is on a journey, or perhaps he is asleep and must be awakened” (1 Kings 18:27). Does this ever happen at an interfaith prayer service? No, that is never done at interfaith prayer services. It is quite the reverse.

And Paul’s preaching of Christ (Acts 13 and elsewhere) was so clear it brought him hostility and rejection, such that he told his opponents that they were “thrusting aside the word of God” and were “judging themselves unworthy of eternal life.” And Paul “shook off the dust from his feet against them” (Acts 13:46, 51). Does this ever happen at an interfaith prayer service? I think not.

Likewise, to cite Peter and John (Acts 4) also works against Kieschnick’s case. Peter boldly proclaimed the exclusive nature of salvation in Christ alone: “This Jesus is the stone that was rejected by you, the builders, which has become the cornerstone. And there is salvation in no one else, for there is no other name under heaven given among men by which we must be saved” (Acts 4:11-12). “No one else”! “No other name”! Does this ever happen at an interfaith prayer service? No way! Participants at interfaith services do not get “persecution or imprisonment” from the unbelievers present; rather, they get plaudits and praise!

To speak the truth in the presence of error requires that one clearly distinguishes and demarcates the truth from the surrounding error. However, when one joins as but one clergy participant among many in an interfaith service, with all of its attendant presuppositions, that necessary clarity does not happen. Such was the case at Yankee Stadium. Such was the case at Newtown. President Kieschnick was wrong then, and he is wrong now.

The New York Times article in which District President Benke is quoted refers to Benke’s participation in the 2001 interfaith prayer service at Yankee Stadium, and then asks him for his comment on Newtown, which he gives:

“The Newtown reprimand was not the first time a pastor from the Missouri Synod has been chastised for taking part in an interfaith service after a national tragedy. In the weeks after the Sept. 11 attacks, the Rev. David H. Benke, the pastor of St. Peter’s Lutheran Church in Brooklyn and the equivalent of a bishop in the church hierarchy, was suspended from ministry for taking part in a huge interfaith prayer service held at Yankee Stadium.

“Mr. Benke had broken the First Commandment — ‘I am the Lord thy God’ — by worshiping with ‘pagans,’ including Muslim, Sikh and Hindu clergy members, the Rev. Wallace Schulz, a senior official of the church, said then. Mr. Benke refused to apologize, and was cleared by a church panel in 2003 and permitted to return to ministry.

“Asked for comment on the Newtown situation on Thursday, Mr. Benke said he did not agree with the denomination’s decision to ask Mr. Morris to apologize. ‘I am on the side of giving Christian witness in the public square and not vacating it,’ he said. ‘If we don’t show up, who can receive our witness?'”

First of all, is President Benke questioning the sincerity of Pastor Morris’s apology? Is he implying that Morris “had his fingers crossed” when he apologized for causing offense by his participation? It was Morris’s decision to apologize, which he did. I think we should accept his words as sincere and genuine.

You know, back in 1998, David Benke participated in an interfaith prayer service (three years before Yankee Stadium). Several weeks later, Benke signed a public apology, in which he stated:

“While well-intended, what I did was wrong. I therefore sincerely and publicly apologize to the Synod for my actions in this connection. I assure the Synod that I will not repeat this error in the future by participating as an officiant in ecumenical services.”

We took President Benke’s words as sincere when he made this apology back in 1998. So I don’t think we–or Benke–should call into question the sincerity of Pastor Morris’s apology now. And Benke seemed to understand the problems with interfaith services, as he stated in his 1998 apology. But now it sounds like he needs to go back to the drawing board on this interfaith thing. He got it right back then. Not so much now.