In today’s Gospel, we catch a glimpse of what the public ministry of Jesus was like. We follow Jesus on what might have been a fairly typical day for him, a very busy day at that. We see Jesus engaged in various ministry activities: teaching, exorcising, healing, and preaching. And the common denominator that runs through these activities? I think we can see it in a little verse from our text: “His word possessed authority.” “His Word Possessed Authority”: in his teaching, in his casting out demons, in his healing the sick, and in his preaching. Let’s see how that authoritative word of Jesus is manifested in each of these four activities and find out what that means for us today.

The first thing we see mentioned is Jesus’ teaching: “And he was teaching them on the Sabbath, and they were astonished at his teaching, for his word possessed authority.” In his ministry, Jesus came as a teacher, a rabbi of sorts. He taught in the synagogues, he taught on the mountainside and the seashore, he taught in the Temple. Jesus taught on the meaning and application of the Torah, the Law of Moses, and the rest of the Hebrew Scriptures.

But then so did the scribes and Pharisees, the other teachers in Israel. What was so different about Jesus? After all, it says the people “were astonished” at his teaching. How did Jesus’ teaching differ from that of the rabbis? In this: “His word possessed authority.”

The rabbis would quote each other: “Rabbi Shammai said thus-and-so”; “Rabbi Hillel said this-and-such.” Jesus didn’t need to quote any rabbis; he spoke on his own authority. Jesus taught as one sent from God, who came from the Father full of grace and truth. He taught with full confidence: He knew what he was talking about, and people could sense that. Jesus taught with authority.

The rabbis would deal with trivial matters of the Law, and worse, they would add on their own man-made commandments: how to tithe mint and cumin; how many steps one could take on a Sabbath’s day journey. And they would neglect the weightier matters of the Law, like mercy and faithfulness. Jesus, on the other hand, cut right through the minutiae and got right to the heart of the matter: love for God, love for the neighbor. No rationalizing away the breaking of God’s commandments: a murderous and adulterous heart can be seen even in thought and word, if not in final outward deed. Instead of excusing divorce with a certificate, Jesus called people back to the beginning and God’s intent and institution of marriage. Jesus taught with authority.

“His word possessed authority” also in another area we probably don’t think about too much: in his exorcising, that is, in his casting out of demons. In fact, that is the activity we see Jesus doing the most in today’s reading. He’s casting out demons, unclean spirits: “And in the synagogue there was a man who had the spirit of an unclean demon, and he cried out with a loud voice, ‘Ha! What have you to do with us, Jesus of Nazareth? Have you come to destroy us? I know who you are–the Holy One of God.’”

Notice that the demon knows who Jesus is. He recognizes that Jesus is the Holy One of God. But that knowledge in itself does not engender faith but rather fear: “Have you come to destroy us?” It’s like James says about mere intellectual-knowledge pseudo-faith: “Do you believe there is one God? Good! The demons believe and tremble with fear.” Well, that’s the case with this demon here. He’s shaking in his boots. 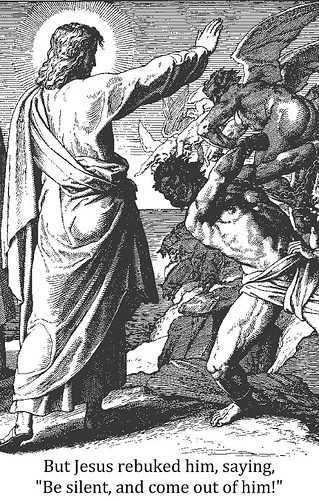 “But Jesus rebuked him, saying, ‘Be silent and come out of him!’” Jesus tells the demon to shut up. That’s the same thing that happens later on in our text: “And demons also came out of many, crying, ‘You are the Son of God!’ But he rebuked them and would not allow them to speak, because they knew that he was the Christ.”

But if these demons know who Jesus is, and they correctly cry out, “You are the Holy One of God, you are the Son of God,” why does Jesus rebuke them and silence them? Doesn’t he want people to know who he is? Yes, but not in this way. He doesn’t want demons to be the ones to announce who he is. First of all, Jesus wants his own works and his own words to lead people to draw the right conclusion. And then he wants his apostles and preachers to have the honor of proclaiming his identity to the world, not a bunch of evil demons. So, you demon, shut up and come out of that man!

“And when the demon had thrown him down in their midst, he came out of him, having done him no harm.” Jesus demonstrates that he exercises authority not just to show who is boss–it does show that, yes–but also to show that he uses his authority to help people. He has compassion on us, just as he has compassion on this demonized man. The demon wants to harm the man; Jesus wants to help him. As Jesus says in John 10, “The thief comes only to steal and kill and destroy. I have come that they may have life and have it abundantly.”

When Jesus casts out these demons, it is anticipating the decisive victory he would win over the devil on the cross. There on the cross, Jesus would defeat the devil by taking away the trump card the devil held over our heads, namely, our sins. But Jesus took away our sins by taking them onto himself. The devil no longer has anything left with which to accuse us! And with sin taken away, death loses its power. The woman’s offspring strikes the serpent in the head and delivers the death blow to his reign of terror. John says in his epistle, “The reason the Son of God appeared was to destroy the works of the devil.” So these castings out of the unclean spirits are indicative of that great mission Christ came to accomplish.

“And they were all amazed and said to one another, ‘What is this word? For with authority and power he commands the unclean spirits, and they come out!’” What is this word? A word of authority! Christ commands, and demons must flee. The devil is no match for our great Champion. “One little word can fell him.” 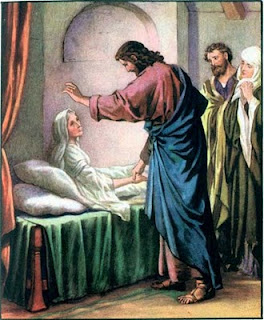 “His word possessed authority” in teaching, in casting out demons, and third, in healing the sick. This too was another way Jesus used his authority to help people in need: “Now Simon’s mother-in-law was ill with a high fever, and they appealed to him on her behalf. And he stood over her and rebuked the fever, and it left her, and immediately she rose and began to serve them.” Jesus rebukes not only demons, he also rebukes a fever. And just as the demons had to leave, so does this fever. Jesus’ word carries authority; it does what it says. What a powerful voice, and a merciful one on top of it! Jesus cares for the well-being of his people, including their bodily needs.

“Now when the sun was setting, all those who had any who were sick with various diseases brought them to him, and he laid his hands on every one of them and healed them.” But you say, “Are there not many other people with high fevers and various diseases–God’s people–who do not get healed?” Oh yes! Indeed, Simon’s mother-in-law, healed here, would later get sick again, or get old, and that time she would not recover. Same with all those other folks who got healed. But these healings that Jesus does here are sufficient to demonstrate that sickness and death are not the end, that the mission Christ came to accomplish will result in ultimate healing for these mortal bodies. “Light and life to all he brings, ris’n with healing in his wings.” Jesus speaks the word of healing, and it is done.

Jesus came to preach. To preach the good news, the good news of the kingdom of God. Jesus went about proclaiming the coming of God’s kingdom, calling people to repent of their sins and to believe the good news that their sins are forgiven in him. This was an authoritative word. Not just some detached, impersonal words about theories or speculations. But an authoritative, personal word, calling out to people and speaking to their souls. A dynamic, living word to real-live people, calling them home to God, a God who knows all their sins and still in his mercy forgives them and accepts them for the sake of his Son, their Savior.

And guess what? Jesus Christ is still preaching that same word today, to you! I’ve been saying all along, “His word ‘possessed’ authority.” But now I want to bring that forward up to today and say, “His word ‘possesses’ authority!” Yes, his word still speaks today, and it is a living, active, powerful word! Listen to the living voice of the gospel: Do your many sins trouble you? Listen, your sins are forgiven! Does the tempter and accuser of our souls cause you grief and doubt? Listen, the devil has no power over you! Does the fear of death and judgment loom in your mind like a black cloud? Listen, death has been defeated! “There is no condemnation now for those who are in Christ Jesus.” Your body–yes, that old achy body you’re sitting in here today–listen, that body will be healed and restored perfectly in the resurrection at the last day!

You see, Christ has spoken his word of authority over you in your baptism. There the Triune God placed his name on you, claiming you as his own. Christ speaks his authoritative word of absolution into your ears, through his authorized ambassador: “I forgive you all your sins.” Christ speaks and authorizes his Holy Supper: “This is my body, this is my blood, given and shed for you for the forgiveness of sins.” Christ speaks his authoritative word of salvation to you over and over again, so much does he want you to hear and believe this good news! It is for you! “His word possesses authority,” and his word declares: You are free, you are God’s child, you are part of God’s forever family!