In the Holy Gospel for today, we see two aspects of Jesus’ character come to the forefront: 1) He is a man on a mission. And 2) He is a man of compassion. And in both aspects, both his mission and his compassion, Jesus’ focus today is on Jerusalem. Let’s find out what all of this has to do with us.

First, Jesus is a man on a mission. That comes through loud and clear in the first half of our text, where it says: “At that very hour some Pharisees came and said to [Jesus], ‘Get away from here, for Herod wants to kill you.’ And he said to them, ‘Go and tell that fox, “Behold, I cast out demons and perform cures today and tomorrow, and the third day I finish my course. Nevertheless, I must go on my way today and tomorrow and the day following, for it cannot be that a prophet should perish away from Jerusalem.”’”

Now it is loud and clear here that Jesus is a man on a mission and that that mission will take him to Jerusalem. But what may not be so clear at first glance is this business about the Pharisees and Herod and “Go tell that fox.” So let me explain.

Jesus had been busy for some time now with his ministry in the region of Galilee. He’s been preaching and teaching, healing the sick, casting out demons, and calling disciples. Jesus has been attracting large crowds and gaining a lot of attention. And all the while he’s also been making some enemies, people who oppose him. Those would include the Pharisees. Jesus has exposed the Pharisees for their hypocrisy, for their wanting to look good and pious in front of people, but in their hearts not really humbling themselves before God. Jesus called them out on this stuff, and they didn’t like it. Jesus was hurting their image. He was exposing their pride and sinfulness. So the Pharisees in Galilee had reason to want to get Jesus out of their hair.

The other party involved here is this fellow Herod. Now whenever you say “Herod” in the New Testament, you’ve got to keep them all straight, because there are several Herods. This one is Herod Antipas, the tetrarch of Galilee. He’s the same Herod who had John the Baptist put to death. And now, the Pharisees tell Jesus, “Herod wants to kill you.” Did Herod really want to kill Jesus, or were the Pharisees just saying this to try to scare Jesus out of the territory? Or maybe Herod wanted to get Jesus out of the region, and that’s why he fed this rumor to the Pharisees, so they would report it to Jesus. Who knows? Our text doesn’t say.

But in any case, one thing is clear: Jesus is not going to be scared into leaving or changing his timetable just because of a threat. He’s got a little more work to do here in Galilee, and then it’s on to Jerusalem. Jesus is in charge of his own schedule. “Behold, I cast out demons and perform cures today and tomorrow, and the third day I finish my course.”

Think back to how this theme has been developing so far in the gospel. After Jesus’ baptism, when he’s being tempted in the wilderness by the devil, one of those temptations is for Jesus to throw himself off the pinnacle of the temple, to land unhurt, and thus win the acclaim of the crowds in Jerusalem. But that will not be how Jesus will accomplish his mission. No, even when the crowds at the cross later will say, “Come down off the cross and we will believe in you,” Jesus resists that temptation, for that will not be how he reaches his goal.

Or think about how, after Peter’s great confession, “You are the Christ,” Jesus began predicting his passion, his suffering: “The Son of Man must suffer many things and be rejected by the elders and the chief priests and scribes, and be killed, and on the third day be raised.” This is what will happen in Jerusalem. This is how the mission will play out. 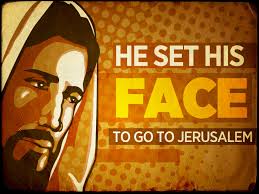 Or again, at Jesus’ transfiguration, Moses and Elijah are talking with Jesus about what? “His departure, which he was about to accomplish at Jerusalem.” And after the transfiguration it says, “When the days drew near for him to be taken up, he set his face to go to Jerusalem.”

Jesus set his face to go to Jerusalem, knowing that rejection and suffering and death await him there. He is determined. There’s no stopping him or diverting him from finishing his course. Jesus has a clear sense of where he is going and what he is doing. That’s what we’re seeing in our text today. A man on a mission.

But why is he doing this? Why is Jesus so determined, knowing what awaits him in Jerusalem? Two reasons: First, he came to do the will of his Father, and this is what the Father wills. This is the Father’s plan for the salvation of the world. And secondly, Jesus is doing this for you. This is the only way the goal will be reached, the mission accomplished. You have sins that need to be atoned for, and you can’t do it. You have death hanging over your head, and you can’t change that. But Jesus can, and he does. For he is the very Son of God, come to do his Father’s will, which is to save sinful mankind. The blood he will shed on the cross, for you–this is the only thing that can pay the debt of your sins. The resurrection that he will thus procure–this is the only thing that will take the sting out of death for you. This then is the mission that Jesus is on. It will take him to Jerusalem–he’s got his face set for there. And so there’s no stopping him until he reaches his goal.

So along with this text showing us Jesus as a man on a mission, it also shows us Jesus as a man of compassion. See the tender, kind, loving heart of our Lord, that he would do this for you! For all us rebel sinners, who have defied God in so many ways. And yet God loves us. Jesus willingly goes the way of the cross for us. What supreme love and compassion this is! 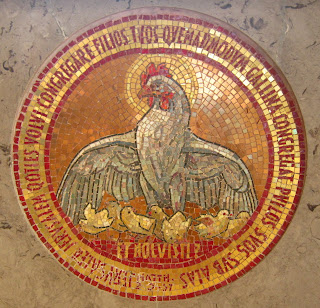 Hear this compassion in Jesus’ voice, as his heart aches for the city that will reject him and kill him: “O Jerusalem, Jerusalem, the city that kills the prophets and stones those who are sent to it! How often would I have gathered your children together as a hen gathers her brood under her wings, and you would not! Behold, your house is forsaken. And I tell you, you will not see me until you say, ‘Blessed is he who comes in the name of the Lord!’”

Of all cities, Jerusalem should have been the one to welcome the Messiah. Jerusalem had every advantage. How many times God had sent prophets to her, calling Jerusalem and the nation to repentance. But how many times had Jerusalem rejected those prophets. And now God was sending his own Son, and they would reject him also. And with that ultimate rejection, God’s ultimate judgment would fall on Jerusalem. Forty years after rejecting their Messiah and putting him to death, Jerusalem would fall at the hands of the Romans in A.D. 70. The temple was destroyed, leveled, never to be rebuilt, down to this very day. “Behold, your house is left to you desolate.”

Sadly, people still say no to God and his offer of grace and forgiveness and salvation. They say no. “No thank you, Jesus, I don’t think I need a Savior. I don’t think I’m that bad of a person. I’ll be fine on my own.” What foolishness, what stupidity, what utter blindness that is! But that is what Jerusalem was saying, that is what people today are saying, when they reject Jesus.

And so it is to this day, all around us. So many in our community, maybe even in our own family–so many in our nation and world–so many are so self-secure, so hardened in their unbelief. They think they don’t need Jesus and what he offers. They don’t think they need the church, which is Christ’s church, his place, his people, his ministry, whereby the gospel of salvation goes out in his name. But know this: All those who think they don’t need Jesus as their Savior–they’re wrong, dead wrong. There is no hope for them, apart from Christ. He is the one and only Savior God has sent into the world, for all men, everywhere. There is no other. This is why they–this is why we–all of us need to repent and believe the gospel.

So how is it with you? Will you be gathered in? Or will you try to go it on your own? Do you think you have what it takes to take care of your sins and overcome your death? Good luck with that. But rather, dear friends, today look to Jesus, look to your compassionate Savior for your salvation. He is the man on a mission, who willingly goes to Jerusalem for your sake. He is the man of compassion, who wants to gather you under his wings and shelter you from the storm and from every danger. O my brothers and sisters in Christ, you are safe and secure–for eternity–with him!