Look at how that theme runs through our readings. In Isaiah 62, the prophet tells Israel that the Lord has taken his people as his bride: “You shall be called My Delight Is in Her, and your land Married; for the LORD delights in you, and your land shall be married. For as a young man marries a young woman, so shall your sons marry you, and as the bridegroom rejoices over the bride, so shall your God rejoice over you.”

In Psalm 128, the psalmist speaks of great blessings that the Lord bestows on those who trust in him and do his will: “Blessed is everyone who fears the LORD, who walks in his ways!” And the psalmist can think of no greater blessings in this life than the gifts of wife and children: “Your wife will be like a fruitful vine within your house; your children will be like olive shoots around your table. Behold, thus shall the man be blessed who fears the LORD.” And, as every grandparent knows, it is a great blessing then to see your children grow up and have children of their own: “May you see your children’s children! Peace be upon Israel!” 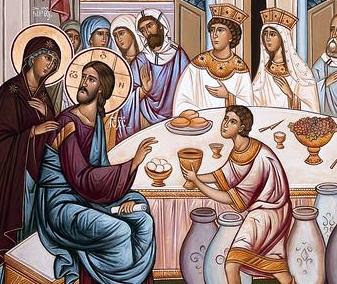 In the Gospel reading from John 2, Jesus is invited to a wedding, and he makes sure it is a joyous celebration, supplying the wedding feast with the best wine–wine, which “gladdens the heart,” as the Bible says. For the marriage of a man and a woman is indeed a very joyful occasion. It is how God has blessed mankind from the beginning, marriage being the first of his institutions. Male and female, meant for each other, within the bonds of marriage, blessed to be fruitful and multiply–that is how our Creator has designed us. So it’s no wonder that Jesus would honor the wedding at Cana with his presence and provide the best wine to celebrate it. Of course, Jesus was using the occasion of that wedding and his abundant supply of wine as a sign, a sign pointing to the even greater blessing he himself was bringing by bringing in the kingdom of heaven in our midst. In his teaching, Jesus often says the kingdom of heaven is like a wedding feast, since that’s about as joyful a thing as we have in our experience with which to compare it.

So it is a sad day, a sad day indeed, when we see a culture–any culture, but especially our own culture–reject God’s ways and go in the opposite direction. Sadly, that is exactly what we are living in now, here in America. The very building blocks of society–marriage and the family–are crumbling. I speak specifically today of two monstrosities that have gained acceptance in our country, and those are abortion and so-called same-sex “marriage.” Both of these things are abominations in God’s sight, yet our society has increasingly approved of these things. Abortion and homosexual “marriage” are not the only evils in our culture, of course, but they are two of the most blatant examples. And so what I want to talk about with you now further, dear Christians, you and I who have to live in a downward-trending culture, is this: “Marriage and the Family: The Cultural Slide and the Christian Response.”

We’ve already shown, from our lessons today, that marriage and the family are “givens” in the Bible as gifts from God and normative for humanity. But let’s come to grips with the cultural slide that we’re seeing all around us and be honest about it. The push for same-sex “marriage” has been a high-profile item in the news in recent years. In just the last nine years, homosexual “marriage” has become legal in nine states. Massachusetts, Connecticut, Iowa, Vermont, New Hampshire, and New York were the first six to bear this shameful distinction. Since November, three more states have been added to the list: Washington, Maine, and Maryland. Also in November, the American people–or at least 65 million of them–voted for the first President ever to advocate same-sex marriage. And today, January 20, he’s being sworn in. What’s does this say, not just about him, but more so, about how far our nation has sunk? My friends, the trend is not good. Things are probably going to get worse before they get better. Our culture is going down the sewer fast.

Then there’s the matter of abortion. Our President also supports that, as do about half the members of Congress. But abortion, like homosexual marriage, is an abomination in God’s sight. It is the willful taking of an innocent human life. It is murder. This Tuesday will mark a very sad anniversary in our country. It was forty years ago, on January 22, 1973, that the United States Supreme Court, in its infamous Roe v. Wade decision, wrongly struck down all state laws against abortion. Since that fateful day forty years ago, America has witnessed the slaughter of over 55 million children, whose lives were snuffed out as a result.

So those are examples of the moral decay we’ve been experiencing. We could cite a whole slew of other examples, as well. But in the face of this cultural slide, what should be our Christian response? Today I want to suggest one comprehensive response, and that is, “Repent.”

Repent. Repent of your part in America’s cultural slide. But you say, “What? I haven’t had an abortion! I haven’t had a same-sex marriage!” Fair enough. But what have you and I done to stop these abominations? Have we spoken out? Have we taken action? Our failure to speak and to act makes us part of the problem–as does our voting for the people responsible for making abortion and homosexual “marriage” legal. In these ways, we share in our nation’s guilt before God.

And even if we have not favored abortion or homosexuality, maybe we have participated in the moral slide in other ways. Have we honored marriage as much as we should have? To what extent were we responsible for a divorce taking place? Do we condone or excuse an adult child living together with someone outside of marriage? If so, then we have contributed to the cultural slide, and we need to repent.

Brothers and sisters in Christ, confess your sins before God–don’t excuse them or rationalize them. Confess them. Don’t just look down your nose at the bad people in our society. Take stock of your own failings first.

Confess your sins, and then, most importantly, receive God’s forgiveness. He will forgive you, you know. This is precisely why Christ came, to win your forgiveness. This is what Jesus was announcing and “signaling” at the wedding at Cana. Those six stone water jars for the Jewish rites of purification–Jesus was filling them full, fulfilling them, and offering something better in their place. Jesus does the real purification job that the Jewish rites were pointing ahead to. He will cleanse you of your sins and your guilt. You have been washed clean in his baptism.

Here’s how. At the wedding at Cana, Jesus said, “My hour has not yet come.” But that hour would come, the hour of Christ’s suffering and death, the hour when he would be lifted up on the cross for your salvation. Jesus took the sin of the whole world, all our rebellion and our resistance to God’s good design for humanity, which is what sin is–Jesus took all that sin and bore the judgment for it in his body on the cross. This is how you are forgiven. This is why you will not die but live. You share in Christ’s righteousness and his resurrection. He gives you new life. He gives you the Holy Spirit, to enable you to live in the newness of life that God has for all of his children.

So now we can live in the ways that God has designed. We don’t have to be sucked into the ways of our degenerate culture and go along with it. We can live and model the better way that God intends, in our marriage, with our children. To be sure, we will stumble and fall from time to time; our battle against sin is not over. But when we do fall, God will help us back up and restore our feet to the right path.

What’s more, God will give you the strength and the courage you need to speak out and to act, in the cause of standing up for the truth, over against the wrong turns our nation has taken. Make no mistake, to do that will take courage. If you speak out against same-sex marriage, for instance, you will be branded a bigot and a homophobe. People will say you are guilty of “hate speech.” If you act against abortion, if you refuse to vote for pro-abortion candidates, you will be called “anti-choice” and “anti-woman.” So be it. Wear the badge with honor. Persecution comes with the territory. It always has, and it always will. Jesus told us, “The world will hate you because of me.” But dear friends, look to where your true reward lies. It lies not with the praise of men, but with the blessing of God. Trust in him, hearken to his word, and he will sustain you. As you make your way through this life, the Lord of heaven will enable you and direct you to walk in the light, no matter how dark the darkness around us becomes.