Our text this morning is the second part of the Christmas Gospel we heard last night, that is, Luke 2, reading now verses 15 through 20: “When the angels went away from them into heaven, the shepherds said to one another, ‘Let us go over to Bethlehem and see this thing that has happened, which the Lord has made known to us.’ And they went with haste and found Mary and Joseph, and the baby lying in a manger. And when they saw it, they made known the saying that had been told them concerning this child. And all who heard it wondered at what the shepherds told them. But Mary treasured up all these things, pondering them in her heart. And the shepherds returned, glorifying and praising God for all they had heard and seen, as it had been told them.”

Christmas has a ripple effect. The good news radiates outward. That’s our theme this morning: “The Ripple Effect of Christmas.” Let me explain.

Last night we heard how the angel announced to the shepherds that God had sent his great Christmas gift in the birth of the newborn Messiah: “Behold, I bring you good news of a great joy that will be for all the people. For unto you is born this day in the city of David a Savior, who is Christ the Lord.” And the angel told the shepherds exactly where they could find the Christ child: “And this will be a sign for you: you will find a baby wrapped in swaddling cloths and lying in a manger.” This truly was “good news of a great joy.”

You see, the birth of Jesus fulfilled the prophecies made to the Old Testament people of Israel. “Jesus” is his name, and “Christ” is his title. The Christ, the Messiah: “Mashiach” is the Hebrew term; “Christos” is the Greek. They both mean the same thing, “the Anointed One,” which was a messianic title. Long ago the prophet Samuel had anointed a young man named David, that is, he poured fragrant oil over his head, marking him out as God’s choice to be the king of Israel, bestowing God’s blessing and the Spirit upon him. Then some years later, after David had been king for a while, another prophet, Nathan, came to King David and told him that one of David’s descendants would become the greatest king of all, bringing in an everlasting kingdom of heaven on earth. The term for this prophesied, long-expected, Son of David to come was the Messiah, the Christ, the Anointed One. He would be sent to rule over the house of Jacob. So the good news to the shepherds is first of all meant for all the people of Israel.

And so the ripple effect of Christmas starts with these shepherds. They themselves are told the good news of the birth of the Messiah. And then what happens when the angels leave? The shepherds say to one another, “Let us go over to Bethlehem and see this thing that has happened, which the Lord has made known to us.” They want to go and see for themselves. The glad tidings from the angel, the announcement of the birth of the Savior–this creates a desire and an excitement in them to go and see. So that is what they do: “And they went with haste and found Mary and Joseph, and the baby lying in a manger.” 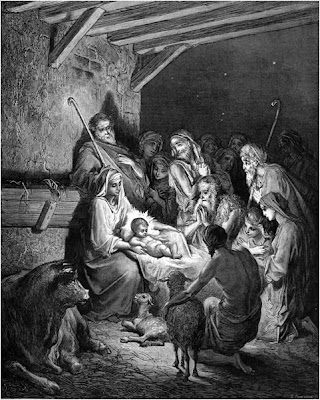 Well, gee, that’s great, isn’t it? I mean, good for the shepherds! They got to go be with Jesus. So I suppose after an hour or so they went home and had Christmas dinner, and spent some time with the fam, and that was that. No, you say? That isn’t what happened? No, actually, what our text says is, “And when they saw it, they made known the saying that had been told them concerning this child.”

Do you catch the ripple effect? First of all, the angel tells the shepherds the good news. And the news is so good, the shepherds just can’t keep it to themselves, and they go out and tell others. At first the shepherds say, “Let’s go see this thing the Lord has made known to us.” And then when they see it, they in turn make known to others the message they themselves had been told concerning the Christ child. It’s the ripple effect of Christmas.

And they didn’t need a formal evangelism program to do it. They just repeated what they had heard and seen, what they knew to be the case about the Christ. That’s all that witnessing is, really. Nothing fancy. No secret formula. Just telling others the good news that you yourself have heard and received and believe.

Isn’t that the way it is when you get some wonderful good news? You just naturally want to share it with others. You don’t need a program. You don’t need to be pressured. If you’ve got something good, and it’s something you can share with others, and it’s something they can rejoice in too–well, you just do it. That’s the way it is with the gospel of Christ. That’s the ripple effect of Christmas.

I don’t need to cajole you or lay a guilt trip on you. I just need to give you more Jesus. That’ll be enough to get you excited and joyful about what God has done for you in Christ. Think about it. Jesus is the Savior not just of the Jewish people, he’s the Savior of us Gentiles too. Christ is the Savior of the whole world, for every single one of us. God loved you so much–yes, you–that he sent his one-and-only Son into the world as this little baby, born into our world of sin and death, to redeem us from sin and death. This is the Big Solution to our Big Problem. The birth of Christ is such a monumental event that we even mark our history according to it, before or after his birth. The coming of Christ to redeem humanity by his life and death and resurrection–this is what all of history is all about. This is God’s Plan. There is no Plan B. This is it.

So for all people everywhere, in all times and places, for everyone you meet–for all have sinned and fall short of the glory of God, and are justified freely for Christ’s sake–Christmas is good news for all people, for Jews and Gentiles alike, for Lutherans and Baptists and Catholics and Muslims and Mormons and atheists and agnostics and everything in between. Everybody who qualifies as sinner–which would be everybody–God wants all people to hear this good news.

And so he has built this ripple effect into the gospel to make that happen. Us Christians, we who believe in Christ and go to church and hear the gospel on a regular or maybe not-so-regular basis–when we hear and believe the message that God has for us here in church, we will be so naturally relieved and grateful and rejoicing to know that God does not hate us but loves us . . . that Christ has died for me, to forgive my sins, which are many . . . that the Spirit has given me the gift of faith to trust in Christ . . . that God has in store for me eternal life, as well as the help to live as his child from day to day, to bear up under misfortune and adversity with a joy that goes deeper than my circumstances–when I realize and rejoice in all of this, I will be glad and ready to bear witness to Christ my Savior, who means all the world to me. And I know that this is the best good news I can tell anyone else. It’s the one thing that everyone in the world really needs, I’m sure of that. 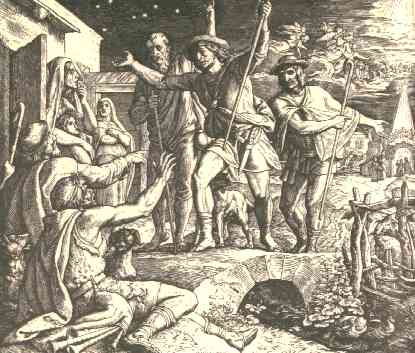 The mouth speaks what the heart is full of. So when your heart is full of the good news of Jesus, guess what your mouth is more likely to speak? That’s right. It’s kind of built into the nature of things for us Christians. We like talking about Jesus. We think it’s pretty cool stuff, good for everybody. This Christ is someone God wants everyone to know about–and to know. And when we have a chance, God will even use our feeble witness to spread the word. It could be to members of your family that you will be spending time with later today. It could be to friends or neighbors that you talk with. I’m not talking about browbeating people or pounding them over the head with a pamphlet. I’m just suggesting a natural witness that arises from a living faith and that speaks out of the joy we have and a genuine love for others.