Well, that’s the way it is with Christmas. God has given us the greatest Christmas present we could ever hope for, but if it had stayed hidden and we didn’t know about it or where to find it, it wouldn’t do us much good. But as it stands, God not only sends the gift, but he has an angel announce it, telling us what it is and where to find it. On top of that, a whole choir of angels caps it off with a glorious hymn of praise. Their song, the Gloria in Excelsis, puts an exclamation mark on the proceedings. So we’ve got three things going on here: “The Gift, the Announcement, and the Exclamation Mark.” We’ll take them in that order.

First, there is the gift itself. It’s the birth of Mary’s son, in Bethlehem. God went to some extraordinary measures to have this gift delivered in this way, at this time, and in this place. We read back in chapter one of Luke’s gospel how this all came about. An angel told Mary that she would have a child, and that she was to name him Jesus. That was extraordinary in itself. But what was even more amazing was that it was to be a miraculous virgin birth. The child would be conceived by the Holy Spirit. Indeed, he would be the very Son of the Most High God, born in human flesh. Even more so, he would be the Messiah, the great deliverer sent from heaven, the divine Davidic king, who would usher in an everlasting kingdom of blessing and salvation.

And then there’s how God arranged to have this child be born where he was, in Bethlehem. A decree went out from the mightiest man in the world, the Roman emperor, Caesar Augustus, so that in God’s wisdom it would cause one no-name couple in some far-off territory to travel from the town where they were living, Nazareth, to the husband’s ancestral town of Bethlehem. The child would need to be born in Bethlehem, not Nazareth. Bethlehem was the town where that old King David was from. Therefore the Messiah, the Christ, the Son of David, would need to be born there also. And God timed it so that the baby would arrive while they were there, in Bethlehem, on this night we call Christmas.

But even in the city of David, the divine Messiah did not exactly receive a royal welcome. Joseph and Mary couldn’t get a room at the Holiday Inn; it was all booked up. So they had to make do in the barn out back. The newborn baby was laid in a manger, an animal’s feed trough. But for the kind of king that Jesus came to be–humble and lowly, coming to serve and not be served–that manger would fit just right. It was truly a king-sized bed.

So while the birth of this child was the most extraordinary gift sent from God, it did not come in the way you might expect, full of pomp and circumstance and out in the open for all the world to see. You know, that’s the way God works with his gifts. They often come in humble appearances, in lowly means, and in out-of-the-way places.

So the gift has arrived, but now how are people going to know about it? That’s where the announcement part comes in. An angel appears to make the announcement, but the people he comes to are not the high and mighty, but rather some shepherds out in the field, just doing their job. I think somehow it’s fitting that shepherds would be the first to hear about the birth of the Lamb of God who takes away the sin of the world.

This glorious angel appears, and, as usually occurs when an angel appears to humans, the people are terrified, and the angel has to assure them with a “Fear not.” With that out of the way, the angel tells them he’s got good news for them, something that will bring them great joy, and not just for them but for all the people of God. “For unto you is born this day in the city of David a Savior, who is Christ the Lord.” The words may be so familiar to us that they whiz right past our ears. But this is really quite a spectacular announcement. Just the fact that an angel appears to announce it is special enough. But here we have word of just what the gift is that God is surprising us with. It’s what the people of Israel had been waiting for and hoping for, for centuries. It’s the Messiah, the Christ, the Anointed One, the fulfillment of the prophecy made to David the king a thousand years earlier: that from his line would come the great deliverer to save humanity, not only Israel but all the nations of the earth.

It just happened today, the angel says, and it happened not far from here, in Bethlehem, the city of David. The angel says the Messiah has been “born” today, so he comes as a newborn baby. But the angel also calls him “Christ the Lord,” and this gets at the profound mystery of just who Christ is, both true God and true man, come in the child born this night.

So the angel tells the shepherds that God’s great Christmas present has arrived, the divine Savior who will deliver mankind. And the angel tells them where they can find him–I mean, so there can be no mistake. He says: “And this will be a sign for you: you will find a baby wrapped in swaddling cloths and lying in a manger.” There may have been another baby or two born in the little town of Bethlehem that day, but I’m sure there was only one you could find lying in a manger. God gives a sure sign that will lead the shepherds to their Savior. 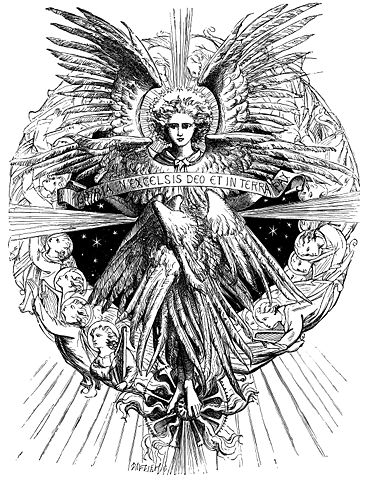 And then to cap it all off, so as to put an exclamation mark on the announcing angel’s astounding words, a whole bunch of other angels appear in the night sky, lighting up the place. And they’ve got a song to sing, in honor of the occasion. Talk about a festival choir! A multitude of heavenly angels praising God with these words: “Glory to God in the highest, and on earth peace among those with whom he is pleased!”

“Glory to God in the highest,” the angels’ song begins. In Latin that comes out as “Gloria in excelsis Deo.” And so the “Gloria in Excelsis” is how we refer to the song of the Christmas angels. Let’s take a closer look at what they’re saying, and it will deepen our understanding of the gift we are receiving tonight.

“Glory to God in the highest.” The birth of the Savior causes all of the heavenly host to give glory to God. The angels in the highest heavens sing for joy when they look down upon Bethlehem and see what God has done. Songs of praise the angels sing–and shall we not join them?

Glory to God in the highest, “and on earth peace among those with whom he is pleased!” What that is really saying is this: “and on earth peace to men, out of God’s good pleasure, out of his good will toward mankind.” God is establishing peace between heaven and earth, between God and man, in the birth of this child, the Savior, Christ the Lord. You see, there was no peace, and there would be no peace, apart from the coming of this child, the Prince of Peace. We were at enmity with God. Our sins had separated us from him. We had come under God’s well-deserved wrath and judgment–yes, every one of us, you and I included. Things were not right. We were not right. Peace with God eluded us. We could not and we cannot find such peace on our own. God himself must make the peace.

And he has now, in the coming of the Christ. Christ himself is our peace. How so? Years later, Christ Jesus, the one whom the angels hailed, soldiers nailed to the wood of the cross. There the Son of God willingly took our sins upon himself and suffered the wrath and the judgment for us. And so the child wrapped in swaddling clothes and laid in the manger would be wrapped in burial cloths and laid in a tomb. But then Christ rose from the dead, showing that his death had done the job and made the peace, and that now all who trust in him will share in his victory and his life. This is the only way that peace between God and man could be established, namely, in the body of Christ Jesus our Lord. Thus our need for the Christmas gift God gives us.

But now where shall we find this greatest of gifts today? We are not those shepherds. If you were to go to Bethlehem today, you would not find a baby in a manger. So where do we find this Jesus and the peace he brings today?

Well, the fact that we sing the Gloria in Excelsis in church gives us a clue. We sing it in the Divine Service. You know the words: “Glory be to God on high: and on earth peace, good-will toward men.” The Gloria in Excelsis alerts us to the fact that this is where we can find Jesus. He is here, coming to us in this service. In the proclamation of the Word, in the celebration of the Sacrament, Christ is here, bringing us God’s great Christmas present in his own presence among us. Christ is here, forgiving our sins, bestowing his peace, giving us his life. These are the greatest gifts we could ever want.

And remember, God gives his gifts through lowly means, in humble, out-of-the-way places. In the words of a pastor, who has no power in himself to forgive sins but who does so on the authority of Christ. In a sermon delivered to a couple dozen people in a small-town church. In simple bread and wine that Christ uses to deliver his precious Body and Blood for the forgiveness of sins. Humble wrappings. Tremendous gifts.

And so we get to join the angels in their hymn of praise. We too are filled with joy, and we glorify God for his unspeakable gift. The Christmas angels’ song is our song, too. The Gloria in Excelsis puts an exclamation mark on what God is doing here among us, giving us the gift of our Savior, telling us that here we can find him, and letting us join in on the joy.

The gift, the announcement, and the exclamation mark: That’s what happens at Christmas. And it happens all year round, every time, every service where Christ comes among us, where his gospel is proclaimed, and where we get to join in the song of the angels.