This month we have been spending the Advent and Christmas seasons in the Gospel of Luke. All of our sermons have come from there, particularly from Luke’s so-called “Infancy Narrative,” chapters 1 and 2, dealing with the events surrounding the birth of Christ. We’ve especially been looking at the canticles we find in Luke 1-2, those poetic, psalm-like pieces included there. We’ve looked at three so far: Mary’s song, the Magnificat; Zechariah’s song, the Benedictus; and the song of the Christmas angels, the Gloria in Excelsis. Now today we wrap up this series with a look at the fourth canticle, Simeon’s song, the Nunc Dimittis. It’s what the aged Simeon says when he finally sees the fulfillment of what he’s been hoping for, lo these many years, when he holds the Christ child in his arms. And what we will find now, as we look at the Nunc Dimittis, is that, both for Simeon and for us, Simeon’s song is saying, “What a Way to Go!”

First, though, let’s set the stage. The account of Christ’s birth itself is found in the first twenty verses of Luke 2. Then in verse 21 we have a brief account of what happened one week later, on the eighth day, which was the circumcision and naming of Jesus, as follows: “And at the end of eight days, when he was circumcised, he was called Jesus, the name given by the angel before he was conceived in the womb.”

Then we come to verse 22, the beginning of our text today. It is now 40 days after the birth of Jesus, and, according to Jewish custom, this was a special day following the birth of a firstborn son, which Jesus was. For one thing, after the birth of any child, at the end of 40 days, the mother would be able to come back to the temple. This ceremony was called the “purification” of the mother. But when the child that was born was a firstborn son, more was involved on this visit to the temple in Jerusalem.

The origins go back centuries earlier to the time when Israel came out of Egypt at the time of the Exodus. You will recall that what compelled Pharaoh to let the people go was the final plague, the death of the firstborn. All throughout Egypt, in every home, the firstborn son was going to die. But the Israelite homes were spared, they were passed over. Their firstborn sons lived. But to always remember that their lives were spared, every firstborn son from then on was to be dedicated to the Lord, set apart for his service, even if only ceremonially.

But, oh, what service, what real service to the Lord, this particular firstborn son will perform! He, Jesus, will be completely dedicated to doing the will of his heavenly Father! He will serve as the great High Priest, offering up the perfect, once-and-for-all sacrifice that will redeem all of mankind. Jesus will do that in his own body, when he offers up himself on the altar of the cross.

The presentation of the firstborn son, then–this is why baby Jesus is taken to the temple in Jerusalem, as we read in our text. That’s where we pick up the story today.

There are lots of people in the temple on any given day. People hanging around, worshipers who live in the area and spend a lot of time there. People coming and going, pilgrims from out of town, coming in for this or that festival or offering or other act required in the law of Moses. On this day, a couple from out of town are coming in to do the firstborn-son ritual–no big deal, it happens all the time. Nobody would pay any particular notice. And there are some older folks there in the temple–retired, pious, devout worshipers, who love to be in the house of God. Again, nothing out of the ordinary. But this is no ordinary day.

The couple with the baby boy are Joseph and Mary. They’ve got their 40-day-old firstborn son with them, a baby by the name of Jesus. Now his head wasn’t glowing. There was no halo to mark him out as special. He just looked like a random, run-of-the-mill, Jewish baby boy–which in one sense he was. The Son of God took on our humanity, born in the flesh, our brother, true man, born of the virgin Mary and adopted as the son of Joseph. But at the same time, Jesus was more than that, of course. He is the eternal Son of God, fully divine, the Messiah sent from heaven. Only, you couldn’t see that with your eyes.

Except, on this day, one man could. His name was Simeon. Oh, and there was a woman there, too, who knew what was going on. Her name was Anna. But for now we’re going to focus on Simeon and the song he sang, the Nunc Dimittis. Both Simeon and Anna recognized this child as the Messiah; they spotted him when Joseph and Mary brought him in. But again, it wasn’t like he was glowing or anything. The only reason they recognized baby Jesus as “the one” was because it was revealed to them by the Holy Spirit. God had made a special promise to Simeon, for example, that he would get to see, physically see, the fulfillment of all the promises made to Israel before he dies. He would see the fulfillment in the coming of the Christ. And now here he is, arriving as a little child, presented in the temple. Simeon and Anna are standing in for all of Israel in seeing the fulfillment of all of the prophecies and all of Israel’s history coming now before their eyes.

And this brings them great joy and deep emotion. Simeon goes up to Joseph and Mary and takes the little baby in his arms. He utters a beautiful song of praise to God: “Lord, now you are letting your servant depart in peace, according to your word,” he begins. Simeon is referring to the special promise the Lord had given him, that he, Simeon, would not die before he saw the coming of the long-promised Messiah. God now has kept his promise. Simeon has seen this baby Jesus, held him in his arms. So now Simeon is ready to go. “Any time now, Lord! I’m ready! I’m at peace. The time of waiting is over.”

Simeon continues: “for my eyes have seen your salvation that you have prepared in the presence of all peoples.” Salvation–salvation bundled up in this little baby boy. Even his name, “Jesus”–in Hebrew, “Yehoshua”–his name literally means, “The Lord saves,” “The Lord is salvation.” That’s what this baby is coming as: Our salvation. Our deliverance. Sent from God to save us from our sins and to deliver us safe and sound into God’s eternal kingdom. Simeon now gets to hold the Savior in his arms and see him with his eyes.

This baby is the Savior of all peoples, Jews and Gentiles alike. Simeon declares what the Spirit has told him, that this child is “a light for revelation to the Gentiles, and for glory to your people Israel.” The Messiah of Israel was always meant to redeem the non-Jewish nations, too, not just Israel. The pagan nations that were sitting in darkness now will see a great light. We Gentiles who did not know the one true God and thus were groping around in the darkness–now we will have the light of the gospel to illuminate our way and to show us the truth. Jesus Christ is the light of the world.

“Lord, now you are letting your servant depart in peace, according to your word; for my eyes have seen your salvation that you have prepared in the presence of all peoples, a light for revelation to the Gentiles, and for glory to your people Israel.” And so here in this beautiful canticle, the Nunc Dimittis, Simeon is basically saying, “What a way to go!” “My life is complete now. I have seen the fulfillment of God’s promises. What more is there but to have the peace of knowing the Lord has sent the Savior promised from long ago.”

Simeon is even given a foreshadowing of how the salvation is to be accomplished. He tells mother Mary: “Behold, this child is appointed for the fall and rising of many in Israel, and for a sign that is opposed (and a sword will pierce through your own soul also).” This is the shadow of the cross. Many will oppose and speak against this Messiah when he grows up. Christ would endure hostility and rejection. He would be nailed to a cross, a sight that would pierce mother Mary’s soul with sorrow, as she sees her own son suffer and die.

But this is how the salvation would be won. Christ suffered and died for your sake, brothers and sisters, when he hung there on that cross. He offered up the sacrifice for your sins, which otherwise would have killed you. But now those sins are forgiven in God’s sight. Your salvation has been secured, because of Christ. The baby in Simeon’s arms would do it. You have salvation and peace now, resurrection and life forever, in Jesus’ name, through faith in him. The Holy Spirit worked this faith in Simeon, and he is working it in you, too, through his word of promise, the gospel.

And so, what a way this is to go! Like Simeon, you are ready to depart this life, whenever the Lord decides to call you home. You know your place in God’s eternal kingdom is secure, secured by Christ’s death and resurrection and made yours when you were joined to Christ in your baptism. 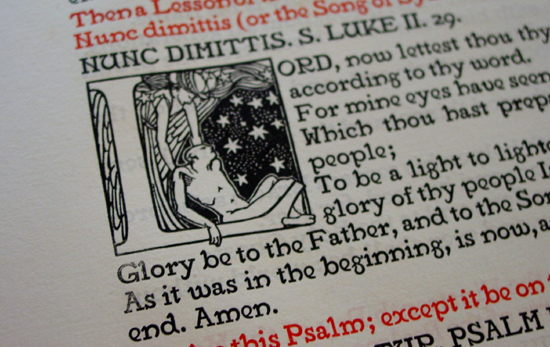 What a way to go! What a way it is for us to end the Divine Service of Word and Sacrament, to sing the Nunc Dimittis. We sing it because we have heard with our ears the precious promise of salvation, proclaimed in God’s Word. We sing it because we have received into our mouth the very Body and Blood of Christ for the forgiveness of our sins. What a beautiful song to sing, then, this canticle called the Nunc Dimittis. By the way, the title, “Nunc Dimittis,” simply is the first couple of words in Latin for “Now you let depart.” “Lord, now lettest Thou Thy servant depart in peace,” and so on. We’ve heard God’s Word. We’ve received the Blessed Sacrament. Now we’re ready to go.

And the Nunc Dimittis also works for us as a way to go from this year into the next. You see, once you’re ready to die, then you’re ready to live. No more fear. Your salvation and your peace are secure in Christ. Now we’re ready to live, to move into 2013 with a confidence and a peace that the world cannot give. Now we’re ready to risk loving people, which is always a risky proposition, since it means giving of ourselves, forgiving those who have hurt us, and serving others at the point of their need. Now we’re ready to confess Christ with our mouths, telling others the good news that we ourselves have received. But we can do it. God has given us peace, a real peace and a sure salvation that are strong enough to live on and love on. We’re ready to go.

So let’s go, shall we? “On into 2013!” in the strength and confidence that are ours in the name of our Lord and Savior Jesus Christ. What a way to go!