Prior to 1530 the Western Church was simply known as the church catholic as there were no denominations prior to this date. Either you were a Christian and a member of the church catholic, or you were a pagan. Then on June 25th, 1530 the Holy Roman Emperor Charles V summoned the Lutherans to assemble at a Diet, a Church Council in the city of Augsburg, Germany. Charles V wanted to unite Christendom and so asked the followers of Luther to explain their beliefs. With the presentation of the Augsburg Confession the first church or denomination was founded in Western Christendom, i.e., the Lutherans.

In time those who disagreed with Luther’s teaching met in the northern Italian city of Trent and crafted the Articles of Trent (1545 – 1563) and the second church, or denomination, the Roman Catholic Church was formed from the church catholic.

The Lutherans—as they came to be called—wanted to retain one holy catholic church for they had no desire to create a new church. And so the tone of this document while being very clear and faithful to Scripture is also very gentle and winsome in its format wanting above all to preserve the unity of the church catholic.

The heart and soul of the Augsburg Confession is Article IV on Justification which teaches: “People are freely justified for Christ’s sake, through faith, when they believe that they are received into favor and that their sins are forgiven for Christ’s sake…. God counts this faith for righteousness in His sight.” The remaining 27 articles in the Augsburg Confession flow from and point towards this central article on Justification.

The importance of the Word for Luther and for all who adhere to the Biblical faith of Abraham, David, Paul, and James can be seen in this little exercise. Think of the “solas,” of the Reformation. It may not readily be known but in the Reformation there were actually four (4) solas. As I list them count the actual number of words involved.

Now, of those five (5) words; “scripture,” “faith,” “grace,” “Christ,” and “alone;” which word was the decisive word upon which the Reformation turned? Often people go through the list suggesting, “scripture,” or “faith,” or “grace,” or even “Christ’. But no. The decisive word upon which the Reformation hinged is that little word, “alone.” All false teachers will speak of “faith,” “grace,” “Christ,” and “scripture”. But they will anathematize—condemn—the word, “alone” and Rome at Trent did just that.

But this is precisely the Biblical witness to which Luther by God’s grace, became captured. The English Standard Translation translates Romans 3:28 as follows: “For we hold that one is justified by faith apart from works of the law.” Due to the context of the verse and the Biblical witness, Luther added one simple word when he translated Romans 3:28. Though not found in the Greek, but certainly residing in the sense of the verse, Luther added that single word, “alone.” In English Luther’s German translation would read: “For we hold that one is justified by faith alone apart from works of the law.” Understandably the Council of Trent (1545 – 1563) strongly objected to Luther’s translation and all that it implied leading the Trentine authors to pen: “If anyone saith that justifying faith is nothing else than confidence in the divine mercy which remits sins for Christ’s sake, or that this confidence alone is that whereby we are justified, let him be anathema” (Session 6, Can. 12).

The sad truth is that all false teachers will speak of “Christ,” but not Him alone as the Savior of our sins. All false teachers will use “Scripture,” but of course it will not be Scripture alone, but Scripture accompanied by human authority such as reason, experience, or church tradition. All who depart from the Biblical faith speak of “faith,” and “grace,” but as you have gathered by now, not alone, but accompanied by some form of human contribution.

When our first parents ate from the tree of the knowledge of good and evil they became the living, breathing, walking, dead—not wounded, weak, or ill, as Satan would have us believe (Gen 3:4)—but dead! Dead in its universal meaning means, well, just that, dead—having no power, life or ability in the least.

Think of Lazarus in the eleventh chapter of John who, having been in the tomb four days, was quickly succumbing to the forces of nature (Jn 11:39). When Jesus said, “Lazarus come out,” (Jn 11:43) it was not as if Lazarus’ auditory ability “heard” Jesus and Lazarus thought to himself, “hmm …, Jesus is calling, I think I’ll see what he wants.” Lazarus was after all dead.

Lazarus was resurrected to life by the Word of God spoken by Christ creating in the Lazarus the necessary faith to receive the grace spoken by Jesus’ words. And all this was accomplished alone, without any contribution from Lazarus’ “… own reason or strength…” (3 Art).

Jesus loves us so much that he has not left one iota of our salvation up to us. For if he had, that would be only one more thing I would mess up in my life. Would any of us be any different? Jesus is our Savior who does everything for us bringing us to faith in Himself. This is the beauty of the Biblical Witness, and the joy of being a Lutheran. 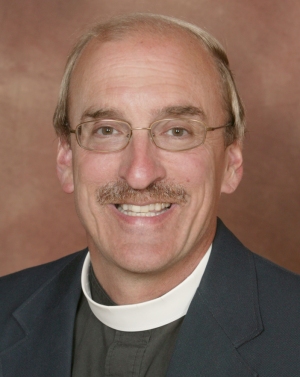 Associate Editor’s Note:  With this post we welcome occasional author Rev. Dr. Karl Weber into our more regular author pool.  Pastor Weber will make a wonderful addition to the site.  Here is some information about Pastor Weber.

Karl has been serving St. Paul’s Richville LC and St. John’s, Ottertail, MN since Labor Day, 2004. He was raised in the Roman Church receiving his BA from Fordham University. Before going to seminary he was a computer programmer in Minneapolis. He served as a short term missionary in Guatemala and Kenya, East Africa. He spent time as a member of the ELCA and studied two years at Luther Seminary, St. Paul, MN pursing his M. Div. before transferring to the LCMS for theological reasons and continuing his studies at Concordia Theological Seminary, Fort Wayne. He was ordained in 1991 and earned his D. Min. in May 2002 from the same institution. He has contributed study notes to The Lutheran Study Bible. He enjoys deer hunting, going to the gym, swimming, and reading. He is married to Mary and has five wonderful children.