Thanks again to a facebook posting of this article by Rev. Anthony R. Voltattorni on his blog We are All Beggers. We previously posted an article by him on How to Appreciate your Pastor.

This article is from last year, but it’s a good reminder of what the Advent and Christmas seasons mean. 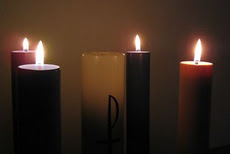 We Christians hold a great festival during the winter solstice, the shortest days of the year. We call this wintertime festival “Christmas,” meaning the “feast of Christ.” It takes several weeks to prepare and several weeks to celebrate.

In contrast, the commercial “holiday season” begins in November and then comes to a crashing halt on December 25. Advertisers have no use for Advent or Christmastime except when it comes to stealing all the religious symbols of these seasons – the tree, the greens, the lights, the music – in order to sell their wares.

We Christians own Advent and Christmastime. The symbols of these seasons are our property, not just an advertiser’s gimmick. If we want to keep them as part of Christianity, we’re going to have to wrestle them back, probably with a good fight.

And it’s worth a fight. We need Advent. We need a time before Christmas to encounter the darkness, to slip slowly into winter, instead of immediately masking it with tinsel. We need a season of hunger and silence to make us eager for our coming festival, instead of “holiday” parties and concerts and all the other distractions that can rob Advent from us. For without Advent we stop being what we are: a people who are waiting. We need the gospel’s terrifying announcement of the end of time. We need the prophets’ consolations and threats. We learn who we are in the uneasy raving of John the Baptist and in the gentle strength of Holy Mary.

We also need Christmastime. We need a festival that runs beyond a single day, beyond a single week. We need time to tell about the journey of the magi, about the embrace of old Simeon, about the leaping Jordon and that glorious voice thundering what we yearn to hear: You are my beloved child!

In the many days of Christmastime we shout loud and clear that Jesus Christ is born. The reign of God is here among us, in our own flesh and blood. That’s why our tradition beckons us to gather around the star-topped tree of life, and tinsel our homes in silver and gold, and spread our tables with the fruitful bounty of the harvest. The marvels of Christmas are not just pretty decorations. They are signs of God’s reign, signs of a life that conquers death, of “the light shining on in the darkness, a darkness that did not overcome it” (John 1:5).

Of course, Advent cannot exist if we jump the gun on Christmas. And Christmastime cannot exist if we are already tired of it by December 25. These two seasons are a package deal: One demands the other. Only after the silence of Advent can the carols of Christmastime spring. Only after Advent’s darkness can a single star give such cheer. Only after Advent’s terror can an angel be heard, once again, telling us to fear not. Year after year, we so genuinely need these seasons as rehearsal for heaven.

This festival of the winter solstice – this “feast of Christ” – does more than lead us from one year to another. In the power of Christ, Advent and Christmastime lead us from time into eternity.