Martin Noland mentioned the LCMC in his article on What, Now, for the Moderate Lutherans?. Previous BJS poster Rev. Joshua V. Scheer (here and here) thought it would be informative for BJS readers to understand more about this group, so he submitted this article that he wrote about the LCMC from the perspective of an LCMS pastor.

Read more papers from Pastor Scheer here. This paper in a PDF available for printing is available here. 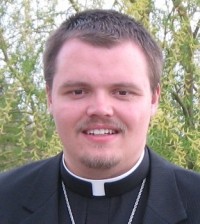 A new denomination is starting to gain numerical strength. A number of former ELCA congregations are now joining the LCMC (Lutheran Congregations in Mission for Christ). This denomination was originally formed in conjunction with the WORD Alone network, which seeks to reform the ELCA from the inside. The formation of the LCMC was official on March 25, 2001.(note 1) The LCMC was a reaction in great measure to the ELCA and Episcopal Church fellowship agreement and the implied change in polity (the ELCA passage of Called to a Common Mission “CCM”). The LCMC says in a promotional pamphlet “We are not a revised version of any Lutheran church body. We are not a traditional denomination at all, but an association of confessional evangelical Lutheran congregations and pastors.”(note 2)

The Confessional stance of the LCMC is similar to the ELCA when it was formed. They subscribe to the Unaltered Augsburg Confession and the Small Catechism. The other confessional documents in the 1580 Book of Concord are considered “further valid expositions of the Holy Scriptures”.(note 6) Scripture’s inspiration is confessed. Inerrancy is not confessed. The preaching of both Law and Gospel is considered also to be the Word of God.

There is one focus of the work of the LCMC. From a document “What is LCMC?” that focus is expressed in this way: “LCMC has one primary mission: that of sharing the life-giving Gospel of Jesus Christ.”(note 7) This finds its working out in church planting, missionaries, and training leaders. The By-Laws of the LCMC state the purpose of the LCMC as “to support our common mission to bear witness to the good news that sinners are put right with God by faith alone in Jesus Christ, to resist any corruption of this gospel, and to serve and support fellow congregations who seek to do likewise.”( note 8 )

The LCMC follows three major points of confession.(note 9) First, they state “We are free in Christ.” This is then related to Romans 6 and the freedom found in Christ. Second, they state “We are accountable to one another.”(note 10) The LCMC is congregational, but also accountable. They defined the church as “where the people of God are gathered together around Word and Sacrament” Another LCMC pamphlet states “We believe that it is primarily here [church of people around Word and Sacraments] that faith is born and nurtured and lives are changed by the power of the Spirit.”(note 11) The local congregation is the visible form of this. The by-laws define a congregation as “a community of baptized persons, gathered around Word and Sacrament.”(note 12) Joining or leaving the LCMC is a simple process of congregational vote. The third point of confession is “We are rooted and grounded in the Scriptures and the Lutheran Confessions.” They deliberately state some other key parts in this section, namely “we reject the notion that science, personal experience, tradition, or other human endeavors have equal footing with the Bible.” Their documents state that these things “contribute to our conversations and deliberations, but the Bible must be our final authority in matters of faith and practice.”(note 13)

The LCMC is organized into Districts and Chapters. Districts are defined as “amazingly flexible partnerships between congregations.”(note 14) Each congregation is free to join as many districts as they would like and may choose to not belong to any district. Districts are organized “around geography, theology, values, shared interests, congregational characteristics, worship styles, etc.”(note 15) The Districts’ names themselves attest to this new way of organization. The names of the Districts of the LCMC are: Cross Alone, Epiphany, Evangelical Renewal, Heartland, North East, Texas, Great Lakes, Northwest, and Prairie to Pines. A chapter appears to be a smaller unit for congregations who do not choose to be a part of any District.

There are several key issues which are emphasized in the LCMC:

Thus far, there seems to be much good in the LCMC for us to rejoice and be thankful for. But there are theological problems in such a denomination. I plan on discussing several including Women’s Ordination, an almost anti-clerical emphasis on the priesthood of believers, Biblical inerrancy and interpretation, and fellowship issues.

First of all, on their paper confession the LCMC appears to properly confess the Scriptures. They even go so far as mentioned earlier as denouncing other earthly things becoming equal to Scriptures. But that language fast loses its potency when it is revealed that the LCMC allow for the ordination of women.(note 17) This is against the clear teachings of Scripture. For the reasons why this error is allowed, another LCMC document helps us to understand. This document giving reasons for the formation of the LCMC states: “Third, LCMC supports and upholds the pastoral ministries of the men and women called to serve the church. This is a large part of the reason why LCMC needed to be created. We could not deny the call of so many women as pastors – which other Lutheran bodies do.”(note 18) This is allowing for experience to rule over the Scriptures. So already, their formal principal of the Scriptures has been violated in the ordination of women. There also seems to be an almost violent reaction to the faithful Lutheran churches that do not allow women to serve as pastors.

There is an almost “anti-clericalism” that comes through the documents of the LCMC. The priesthood of believers is emphasized first and foremost in their constitution under the topic “Ministry”.(note 19) There is a good emphasis on vocation in the distinction between the public ministry of Word and Sacrament and the daily ministries of the baptized members of the congregations. This distinction is somewhat lost in their documents however. One document states “LCMC makes it a point to celebrate the Priesthood of All Believers at every level.”(note 20) The same document states “all the people are ministers of the church called to proclaim the good news of Jesus Christ.”(note 21) Another document hints that lay people are qualified to lead communion.(note 22) This is in clear violation of the Augsburg Confession. The plain simple fact of the matter is that the LCMC is reacting to the ELCA and the Episcopal Church. Despite their claims to be a forward looking church body(note 23) that is not reacting, their publications reveal something quite different.

The topic of Biblical inerrancy should be noted in the discussion of the LCMC. They do not in any of their document express the idea of inerrancy. They do not discuss the use of the historical critical method of interpretation, although since women’s ordination is allowed, it can be assumed that the LCMC has little or no problem with historical criticism.

The last major topic of discussion is fellowship. The LCMC defines their organization as “post-denominational”.(note 24) This view causes all sorts of questions in relation to church fellowship issues. Congregations are allowed to be a part of other denominations and the LCMC.(note 25) Clergy members are allowed to be on the roster of other church bodies as well.(note 26) This is supposing that they can subscribe to the LCMC statement of faith and constitution. This is a flat out difference over historic denominational membership. The implications could be great for fraternal pastoral relationships and also for communion fellowship. Communion fellowship is nowhere mentioned in the existing LCMC literature. This is largely due to the congregational nature of the church body.

A final concern is that the LCMC allows for its clergy to be trained at a number of seminaries that even includes non-Lutheran ones. For example, Sioux Falls Seminary (formerly North American Baptist Seminary) is listed as an approved seminary for the LCMC. The candidate coming out of this seminary will be taught largely by Baptist or Reformed professors. Can this be good for the future of a church that swears loyalty to the same Lutheran Confessions which would condemn most of the teachings that these professors believe themselves? This represents another disconnect between the confession of the LCMC and their accepted practices.

The days of easily deconstructing the theology of the ELCA are over. The LCMC is much more elusive to pin down to a certain theology or practice due to its heavy congregational structure. A survey of the different districts of the LCMC reflects the wide array of beliefs and practices allowed in the LCMC. The Evangelical/Renewal District lists as one of its key values “passionate worship” and speaks in very non-Lutheran language.(note 27) The Cross Alone District has a respectable Lutheran confession in its “Charter of Freedom”(note 28) and “Describing Ourselves”.(note 29) The Epiphany District appears to be organized to provide instructional materials.(note 30) The Heartland District is heavily focused on disciple making, even using the language of “seekers” and “believers”.(note 31) The variety of districts only emphasizes the origin of most of these congregations, the ELCA.

It is notable that three quarters of the congregations in the LCMC have decided to leave a church body over issues of doctrine. This is commendable and we should applaud their willingness to separate from false teaching in that respect. However, as often with reactionary groups, there is a large emphasis in the LCMC on their reaction to the abuses and false teachings that they left over. The shift has moved too far to the other direction. There are many things that are commendable with the LCMC like its insistence on Law/Gospel preaching and renewed interest in the Lutheran Confessions. There are still some problems that stem from false doctrine that was not addressed, like women’s ordination, a confusing doctrine of the ministry, biblical interpretation, and fellowship with other church bodies or even with other congregations.

Despite these problems and false teachings that are a part of the LCMC, it may be advisable to engage them in discussion and encourage them in their renewed interest in the Scriptures and Lutheran Confessions. The members of the LCMC have begun to understand how important doctrine can be. They have begun to realize how much went wrong in the ELCA. With patient and acceptable cooperation, the pastors and congregations of the LCMC could use their momentum away from the false teaching and come to right teaching and practice. We, as a confessional Lutheran church body should be there to discuss these things with them. We should ask them pointed questions about the remaining poison in their body, and engage in study about these things with them. Lift up the Truth of God’s Word and its faithful exposition in the Lutheran Confessions and let God the Holy Spirit do His work!

For the glory of God and the good of all Evangelical Lutheran Churches
Rev. Joshua V. Scheer