Last week we shared with you the troubling news that heterodox consultants were a driving force behind the Blue Ribbon proposals for restructuring the LCMS. That was not known prior to the release of the final report. What has also not been seen is the new organizational chart for the synod. President Kieschnick unveiled this at a recent meeting of the staff at the International Center.

What is striking about this org chart is how much authority has been rerouted to the president. Under President Kieschnick pastors in the LCMS have become less like  caretaker of souls and more like the CEO of the congregation. Now the restructuring proposal makes  the synodical president  more like the CEO  of the synod and less like the supervisor of doctrine and practice. The former is a business role, the latter is a churchly role. The church needs to be the church and not a business.

The church is the family of God but with President Kieschnick the church has become  a business. For sure the church needs to use sound business principles in conducting its business but that does not mean the shepherds become managers and CEO’s.

This new structure also undermines the role of the laymen in the LCMS. The most striking change in this new structure is that the service programs of the synod do not report to boards elected by the pastors and laymen of the synod in convention but now report to the synod president who is no longer chiefly a supervisor of doctrine and practice (as the LCMS handbook describes the office) but has now become the chief peddler of programs and advice. This is just one of the examples of centralizing power in the Blue Ribbon proposals. We will bring you more examples as we draw closer to the president’s million dollar caucuses coming this winter.

The LCMS needs to return to being a group of congregations where the power and authority is the preached and sacramental word of Christ. In President Kieschnick’s synod, the emphasis is on business practices, sociological principles and cultural relevance. (Click on the chart to see a larger version of it.) 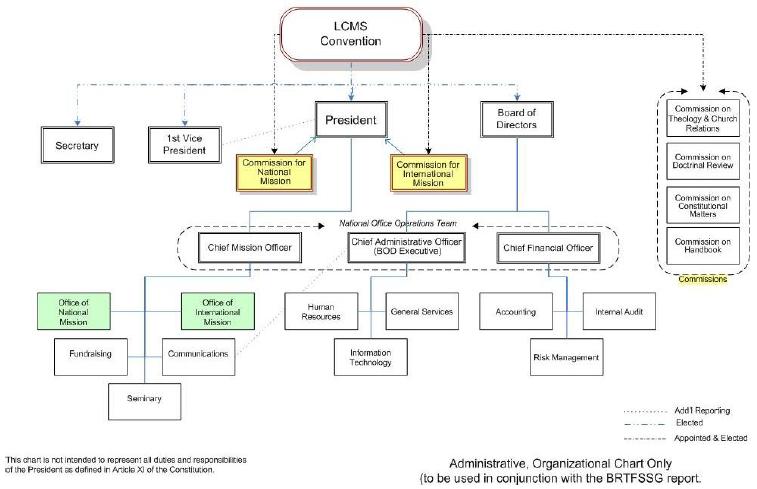