(Editor’s Note – The following is from the newsletter of Good Shepherd Lutheran Church, Lincoln, Nebraska, pastored by  Rev. Clint Poppe. The rest of the story is explained in the introduction that follows.)

From the Pastor’s Pen: “Speaking the Truth in Love” Ephesians 4:15 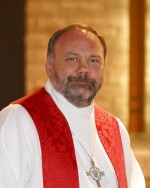 For the past six years, in addition to my call and duties here at Good Shepherd, I have had the privilege to serve the Nebraska District of the Lutheran Church Missouri Synod as regional vice president and First Vice President of the District.

Over a year ago, at one of our regular congregational meetings, I announced that I would not be allowing my name to stand for President or Vice President of the District in the future. While there were parts of my service that I certainly enjoyed, there was much time away from family and congregation. I am very thankful for these sacrifices. It also became more and more clear to me that this position required more of a politician than a theologian; I felt I could no longer serve in good conscience.

Grace and peace, love and mercy, from God our Father through Jesus Christ our crucified and risen and ascended Lord and Savior. Amen.

I would like to thank President Sommerfeld for allowing me a few minutes to address the convention. It has been an honor, privilege, and at times a challenge to serve the people of God in the Nebraska District these past six years as first vice president of the district. Thank you to the many congregations who placed their trust in me again for continued service. For years I have been telling people that when it comes to church, there is not a political bone in my body, yet some just didn’t believe me. Just over a year ago I made the decision that the only way to demonstrate my sincerity was to decline nomination. I pray that this choice is a God-pleasing one and that people would put the best construction on my decision.

I have seen and experienced a great deal in the past six years, and based on that experience I would like to offer some words of encouragement to and for the church. One of my special joys had been the opportunity to attend and participate in numerous ordinations, installations, anniversaries, and other congregational celebrations. I am thankful that the congregation I serve graciously allowed me to serve in this special way. I have been quite literally from Waunita and Imperial in the West to Falls City and South Sioux City in the East, with many, many points in between. As a life-long Nebraskan I was privileged to see and experience parts of the state that I didn’t even know existed. The one joyous constant was the love of Jesus Christ shining in and through the people of God in this place; united in the love of Christ. I encourage you, brothers and sisters in Christ, to strive for the kind of unity that Paul encouraged the Ephesian church to strive for: “I therefore, a prisoner for the Lord, urge you to walk in a manner worthy of the calling to which you have been called, with all humility and gentleness, with patience, bearing with one another in love, eager to maintain the unity of the Spirit in the bond of peace. There is one body and one Spirit – just as you were called to the one hope that belongs to your call – one Lord, one faith, one baptism, one God and Father of all, who is over all and through all and in all.” (Ephesians 4: 1-6) This unity is not something we create or achieve by human action; it is a gift from God. This unity is not dependant upon method or style but promised by the Triune God wherever the Word of God is proclaimed in its truth and purity. (Lord’s Prayer, First Petition) This unity is built not upon conventions and bylaws, but on the solid foundation which is Jesus Christ crucified and risen for forgiveness, life and salvation.

It is no secret that our beloved church, at all levels, has been plagued by division. This is nothing new and certainly not a post 9/11 development in the church. From the earliest days of our synod, in the controversies surrounding the banishment of Martin Stephan and choosing sides in the Civil War, the Predestination controversies and the English language debate, the Statement of the 44, the 1970’s “Battle for the Bible”, continuing worship wars and now Yankee Stadium, it may appear that we have been and currently are more divided than united. Look around right now. How sad that we have some brothers and sisters in Christ who will not commune, worship, or even speak with each other; continuing sinful divisions both real and imagined. Dear friends in Christ, God loves reconciliation! That’s why He sent Jesus into this fallen world; “Therefore, if anyone is in Christ, he is a new creation. The old has passed away; behold the new has come. All this is from God, who through Christ reconciled us to himself and gave us the ministry of reconciliation; that is, in Christ, God was reconciling the world to himself, not counting their trespasses against them, and entrusting to us the message of reconciliation. Therefore, we are ambassadors for Christ, God making his appeal through us. We implore you on behalf of Christ, be reconciled to God. For our sake he made him to be sin who knew no sin, so that in him we might become the righteousness of God. Working together with him, then, we appeal to you not to receive the grace of God in vain. ” (II Corinthians 5:17-6:1)

During the last several years, I have heard many people sincerely speak of missions and outreach, and with it very little mention of Christ’s once and for all sacrifice on Calvary’s cross. I have heard well-intentioned people speak passionately about all the people dying and going to hell, as if their fate was somehow dependant on our efforts and that Christ’s It-Is- Finished word meant nothing. I have seen doctrine and practices introduced into our congregations under the heading of new, contemporary, and emerging, which are nothing more than repackaged revivalism and New Measures of the 19th century. I have heard of a young woman who refused to commune at one of our district congregation’s altars because she had never used a hymnal before in worship and didn’t think she was in a Lutheran church. I fear that in our desire to be diverse and contemporary, we have inadvertently lost our Lutheran identity. All Lutherans, by definition, are confessional Lutherans. We promise that the Creeds and Confessions contained in the Book of Concord are a correct and true exposition of Holy Scripture. It is my prayer that we confessional Lutherans would be truly confessing Lutherans; Lutheran by conviction!

As we move forward together, fellow sinners redeemed and reconciled by the holy, precious blood of Jesus, may we always remember the material principle of true Lutheranism, the thing that really matters most, the main thing: we are justified, that is declared righteous, by grace alone, through faith alone, in the person and work of Jesus Christ alone, as revealed to us in Scripture alone; to God alone be the glory! This is what it means to be Lutheran; always has and always will!

Luther says it this way; “Therefore I say that there is no force that can resist the sects, and not remedy against them except this one doctrine of Christian righteousness. If this doctrine is lost, it is impossible for us to be able to resist any errors or sects. We can see this today in the fanatics, Anabaptists, and Sacramentarians. Now that they have fallen away from this doctrine, they will never stop falling, erring, and seducing others ad infinitum. Undoubtedly they will arouse innumerable sects and think up new works. Although in outward appearance all these things may be very good and saintly, what are they in comparison with the death and the blood of the Son of God, who gave Himself for me?” (note 1)

C F W Walther, in his 1859 Essay on Justification, (note 2) addressed to a District Convention much like this one, teaches us that keeping justification central in all we say and do is an ongoing challenge for the church. “Why is it that this conviction [justification] has to a large extent disappeared even within the Evangelical Lutheran Church?” Answering his own question he states, “Because most of the teachers in it have themselves lost this treasure.” Walther goes on, cautioning against a spirit that “considers purity of doctrine unimportant,” and “enthusiastic stimulation of feelings through all sorts of new regulations that downplay the means of grace instituted by God.” (p. 54) We need to heed his words of caution today as well.

Finally, Walther addresses both preachers and hearers, suggesting several measures that should be taken to awaken the lost consciousness of justification. To pastors he gives one word: Study! Study the Word of God and especially the Epistles of Paul. Study the Confessions. Study Luther. The fruit of this study will be, “that they, pastors, evidence all faithfulness in this improved knowledge thus acquired by God’s grace, untiringly promote the pure doctrine of justification as the basic and chief doctrine, inculcate it in their hearers, and conform all their sermons, catechism instruction, private teaching, admonitions, reprimands, consolations, counseling, in short, their total care of souls and congregational leadership to the pure doctrine of justification as the root, the central point, and the crown of all doctrine.” (p. 54)

“With respect to the hearers, however, it will be essential above all that they be directed to this pure pasture of the sweet Gospel, which alone makes one willing and glad to do good works. They should especially be introduced to Luther’s writings, have awakened within them the joy of reading the same, be helped to understand them, be shown the essential difference between them and all other human devotional books without exception, and be made aware of the proper use of the treasures of clear perception and of deep Christian experience contained in them.” Walther goes on to say that if this were to actually happen, the pure doctrine of justification would soon return and, “with the return thereof, by the repossession of this most precious treasure of doctrine, the blessing would be renewed that the age of the Reformation, comparable only to that of the apostles, so richly enjoyed.” (p. 54)

I would humbly submit that Walther, 150 year ago, in his urgent plea to the Lutheran church, was calling us to be ablaze with the doctrine of justification, “For practically 30 years Luther himself stood in spirit at the stake, a death he would have suffered with joy and rejoicing; however, it was not God’s will that he should teach by his death, but in and by his life. Now, as he won the battle against his enemies solely because the doctrine of justification ruled his heart, and constantly thought in harmony with it, so also our Synod can be victorious against the sects and all other enemies only if a fire, lit by a correct understanding of the doctrine of justification, begins to blaze up in us as it burned in our beloved Luther.” (p. 56)

May God grant this to us all, for Jesus’ sake. Amen.