(Scott’s posts are archived on the Regular Columns page under the title “Apologetics: Apply Liberally.” This is the first in a series on the TCN program. It is also posted on his website Stand Firm.) 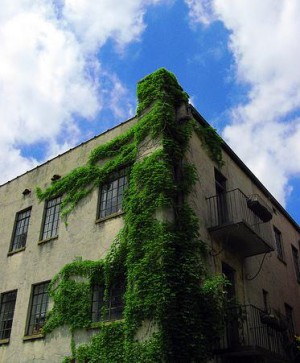 You may have heard of the invasive plant species called kudzu, which has taken over the south. Originally imported from Asia and used extensively to control soil erosion, this non-native vine grows rapidly, overwhelming native plant species. It kills trees, covers abandoned buildings, and collapses power lines. Indigenous animals lose their food supplies, resulting in starvation. This foreign plant, which was meant to be a helpful aid, has instead become a complete disaster.

There’s a similar invasion that is quietly going on in the LCMS, with congruent catastrophic results – the name of this non-native “species” that is currently invading the LCMS is the Mission Revitalization Process.

The Mission Revitalization program is an outgrowth of , and was begun by LCMS World Missions through its Revitalization Task Force. Its goal is to “revitalize” at least 2,000 LCMS congregations by 2017. 1/3 of its budget comes from the LCMS World Mission budget, a portion comes from other LCMS sources such as Fan into Flame and participating districts, with the remaining funds coming from private contributions. The Transforming Churches Network (TCN) operates the Mission Revitalization program. While the developers of TCN should be praised for their desire to “grow” the Church, their methods fall short of the Scriptural mark.

The voluntary transformation process begins when a team of trained consultants visit your congregation for a weekend, and develop five “prescriptions” which are designed to revitalize the congregation. These prescriptions include turning your congregation from an alleged inward focus to a missiological outward focus using “vision,” leadership development, and an Accountable Leadership Model. The Accountable Leadership Model remodels your church bylaws, turning the pastor into the CEO, complete with a (usually) three-person Board of Directors, and turning the parishioners into the ministers of the congregation. Does any of this sound vaguely familiar? It should, because it’s at the heart of Church Growth Movement (CGM) thinking.

“The ultimate goal of TCN is to bring about a deep and systemic change in the Missouri Synod, and for us to accomplish that not only do we need to provide training and resources for existing pastors and congregations, but we also want to make a significant impact on the formation of new church leaders at the seminary and university levels”(online reference). Supplementing the program are other spinoffs. The District supplies a coach for at least one year who guides the pastor and congregational “leaders” as they make the paradigm shift from Word and Sacrament ministry to a CGM ministry (not all Districts are participating). There is a “learning community” for both the pastors and the lay leaders, which utilizes the Ablaze! Leading series. It “offers training modules to equip pastors and church leaders to develop leadership skills necessary to support the change in culture of a congregation consistent with a shift in focus from an inward to outward”(online reference).

Triads are formed, which consist of three people — a mature Christian, a new Christian, and a “seeker,” which meet regularly around prayer and Scripture. “Triads arise out of the initiative of individual Christians, not church programs, and become a non-threatening place for seekers to ask questions, share concerns and meet the personal Jesus” (online reference).

A small group model called Groups Ablaze! is put into place. It is billed as “a simple non-threatening process which prepares congregational members, meeting in small groups to form relationships with people outside the church and sharing the good news of Salvation in Christ with them. Six modules, each spanning six weeks of discussion material lead small groups to be motivated and spiritually equipped to effectively respond to the Great Commission of Jesus. Groups Ablaze! is currently being used by nearly 300 congregations in a dozen LCMS districts.” It is modeled on cell church principles, which are often problematic.

The myriad of programs that are cobbled together to create the Mission Revitalization Process come from the minds and theology of non-Lutherans. I counted at least nineteen different books recommended by TCN to shape the perspective of TCN participants — they were written by people who were Baptist, Methodist, Disciples of Christ, Fellowship of Grace Brethren, non-denominational, secular, even one Mormon, but not a single Lutheran.

The concept of Triads come from Fellowship of Grace Brethren pastor Neil Cole in his book Cultivating a Life for God. He is the founder and executive director of Church Multiplication Associates.

The congregation consultation process, which is at the heart of TCN, comes from the founder of  Growing Healthy Churches, Baptist pastor Paul Borden. “He has been a lead consultant in a number of LCMS Congregations this past year, and his methodology has had a major influence on the consulting process developed by the Transforming Congregations Network (TCN)” (online reference). The methodology comes straight from his book Direct Hit. A good indicator of where his group gets it’s “theology” can be deduced from the article on their website titled “What Can the Church Learn from Costco?” (Their answer to the question is not “Nothing.”)

The coaching model used for Groups Ablaze!, called the GROW model, comes from the book Coaching for Performance, written by the Executive Chairman of Performance Consultants International, Sir John Whitmore. According to his website, he “is a pre-eminent thinker in leadership and organisational change and works globally with leading multinational corporations to establish coaching management cultures and leadership programmes.”

A synopsis of his book states:

Translated into over a dozen languages, this essential training guide has been used by organizations large and small, in nearly every corner of the world-from Coca-Cola, IBM and Ford Motor Company to the Hollywood, Florida, Police Department-to develop the personal and professional skills leaders need. This new edition introduces three new chapters, expanded examples, and an update to Whitmore’s original GROW model for fundamentally transforming management style and culture. New material includes additional chapters on raising self-esteem, incorporating meaning and purpose into work, setting goals, and adding a spiritual approach to coaching. A new section explains how to improve performance by applying coaching to organizational culture (online reference).

The chief consultant and strategist for TCN is Dwight Marable, the President of Missions International. He’s had a hand in virtually every aspect of the Mission Revitalization Process, which is reported to come from a Baptist background.

Their mission statement reads: “…’to have the greatest impact possible on where the largest number of people possible spend eternity’ is carried out primarily through doing quality research on what the Holy Spirit is doing and creating training tools for pastors and leaders from t he research.” According to his website, “Dwight had a personal encounter with Christ and devoted his life to Him in 1963.” His statement is typical of those who have built the TCN foundation, and indicates that his interest lies in the “Jesus in me” rather than the “Jesus for me.” Whether these consultants have “a personal encounter with Christ,” or “decide for Christ,” the one thing they don’t have is a proper understanding of Scripture — a requirement that is absolutely critical when you are teaching Christ’s Church.

All of these consultants are steeped in Church Growth Movement ideology, which is generally constructed by those who don’t believe that conversion comes by hearing the Word of God without a “decision” on your part, or who don’t believe that conversion comes by the operation of the Holy Spirit through means. When you don’t believe that the Word has the power to convert unbelievers, then helping the Holy Spirit with your own techniques in order to “convince them” becomes the modus operandi. The Scriptures become an instruction manual on how to live your life, rather than the unfolding of God’s divine plan of salvation in Jesus Christ. Since they hold to a flawed Christology, all other articles of faith, such as their views on sanctification, the Church, the Office of the Holy Ministry, and the Sacraments, are corrupted. Evangelism, which should be entwined with the liturgy, Word, and Sacrament, becomes a pragmatic board game played out on squares labeled “sociological studies,””emotion,””felt needs,””business marketing,” “assessment testing,” “accountability,””coaching,””attitudinal changes,” and “psychological manipulation.”

These distorted CGM ideas become the riverbed from which the “mission” of the Transforming Churches Network flows. Next time, we’ll take a look at how their flawed ideas manifest themselves in the life of the Church.