One of the goals of the Brothers of John the Steadfast is to raise funds for new Lutheran media, particularly the radio show Issues, Etc. 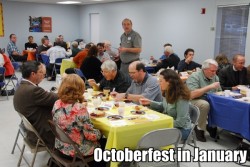 The “Men of Faith” BJS chapter in Plano, Texas recently had an “Oktoberfest in January” fundraiser. The dinner raised over $800 for Issues, Etc. This news  is reported to us by Brother of the John the Steadfast Larry Everett from Faith Lutheran Church in Plano where the chapter is located.

The Brothers of John the Steadfast organization was started last summer and  already has ten chapters around the country and in Canada, including the “Men of Faith” in Plano. In addition to raising funds for new Lutheran media, BJS is also committed to helping men and women grow  in knowledge  of the Lutheran Confessions, uphold the office of the ministry, support the historic liturgy and help men be better leaders at Church and in the home.

The chief object of our  fundraising, Issues, Etc., was formerly a service of the Lutheran Church 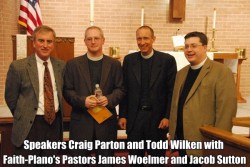 Missouri Synod until the synod unjustly cancelled them last Spring  without any meaningful explanation. They are now back on the air and dependent entirely on listener support. The show’s host, Pastor Wilken was in Plano for a conference connected to the fundraiser along with Brothers of John the Steadfast advisory board member Craig Parton who  also spoke at the conference of the featured speakers at the conference.

Click on the pictures for a more detailed view