(A few weeks ago we heralded the first international BJS chapter. It is up in Ontario, Canada. Pastor Otten in his regular column takes us north of the border again for another Steadfast Lesson from the Past. Be sure to check out our other regular columns for posts you may have missed.)

This STEADFAST LESSONS FROM THE PAST does not arise out of a search of this retired writer’s files, as Rossow directed him to do for his posts on this website. “There,” Rossow said, “you would find material that would reveal how faithful brothers in years past boldly confessed and defended confessional Lutheran theology.”

Instead, this comes from a search of the files, but that search was not precipitated by looking for material for a post in BROTHERS OF JOHN THE STEADFAST. A look into this old man’s files was occasioned by hearing of the sad reality that the first congregation in Canada to join the Missouri Synod, St. Peter Lutheran Church of Rhineland, Ontario, because of a decrease in membership, is no longer worshipping in that place where it was first founded in 1854 by Pr. Wm. Loehe’s first Sendling, Pr. Adam Ernst. Ernst was present at First St. Paul of Chicago when the Missouri Synod was founded there in 1847, and was one of the original signers of Synod’s first constitution. The remaining members of St. Peter of Rhineland, which he founded, will become one congregation with St. Luke Lutheran Church of Tillsonburg, Ontario. St. Peter of Rhineland was where this writer was ordained 50 years ago and was served by him from 1959-1962. 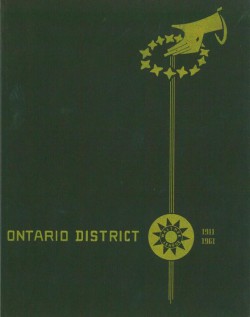 organized and planned joint activity for all the local leagues. It worked well. 1960 marked the 50th year of such activity. An anniversary booklet was prepared. It reveals what the Walther League once was. Page two explains the booklet’s cover. The cover was designed by and the explanation was written by the president of the Ontario District Walther League, Paul Pollex. Paul would later enter the seminary and become a pastor, but he had not yet done so in 1960. What Paul designed and wrote brought joy where there had been sadness for this nostalgic reader. The cover is almost totally black. Of the cover Paul writes,

“Be thou faithful unto death and I will give thee a crown of life.’ Rev 2:10

On the cover the almighty wounded hand of God the Son gives the crown of life to all who have been faithful to Him throughout their lives. The Way of Life is represented by the three vertical golden lines. Man is set upon the Way of Life which leads to God by the power of God the Spirit using as His means the Word and Sacrament…

Man is lost in total darkness of sin. In the blackness of sin appears the golden rays of God’s love. Love is manifested in the Hand nailed to the cross. It is this Hand which reaches down into man’s life of death and fills all of life with the golden ray of life and hope and joy. It is this message of love that is employed by the Holy Spirit to lead us to the Way of Life.

We live our lives in the framework of this love. Satan would draw us from the Way. At times we do fall, we fall back into the outer darkness of sin. But again the Hand of love and grace intervenes and returns us to the Way of Life.