(One of the goals of Brothers of John the Steadfast is to train the Brothers in good practice and theology. This article is one in a series that teaches about the liturgy.

These articles were initially intended to be put into bulletins or read during the service to educate the laity on the different parts of the service. They were therefore purposefully made short. 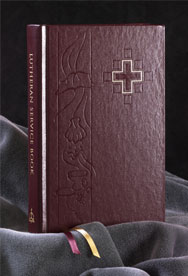 The Hymn of the Day is a tradition that began in the early 18th century. The idea is that the hymn is chosen to reflect the theme of the sermon (Luther Reed, The Lutheran Liturgy). But let’s zoom out and look at a big picture issue — the use of hymns in general. The argument is made that hymns are boring or irrelevant, and we need to liven up the music in order to reach more people. If this is a valid argument, then it’s ironic that the winner of a popular television talent show won by singing mostly opera music (Neal Boyd on “America’s Got Talent”).

This is an important subject because in many churches classic hymns have been ousted for a diet of praise music. To give an analogy, this would be like a parent taking away a child’s bread, fruit, vegetables, meat and feeding him cake, ice cream, soda, and chips. Would any child complain? There is a place for cake and ice cream but not as the main meal! Many of these same congregations unwittingly admit this at times such as Christmas or funerals. Even some congregations that only use praise music throughout the year seem to realize that such music really isn’t appropriate all of the time, or you’d never hear traditional Christmas music in December or you’d hear praise music at a funeral service.

With this shift in what is sung in the church, there can also be a shift in the focus of the worshipers. A steady diet of praise music can work against the idea of “Divine Service.” In the Divine Service, we receive the service of God. We know He is present because He speaks to us with His Word, He feeds us with the Lord’s Supper, He washes us in Baptism. A church that relies on praise music can become emotion centered. I know God was working because I “felt” Him. Thus the worshipper’s attention is shifted away from the service of God in Word and Sacraments. Instead the worshipper’s attention is driven inward to subjective emotions.

Lutherans are not the only ones who are concerned about this. A well known evangelical pastor, John MacArthur, has written about the loss of classic hymns. He bemoans the fact that doctrinal content and the teaching function of hymns have been lost with the overuse of simple praise songs. Of classic hymns MacArthur writes, “They were written to teach and reinforce Biblical and doctrinal concepts…Those hymns aimed to praise God by proclaiming His truth in a way that enhanced the worshiper’s comprehension of the truth. They set a standard for worship that was cerebral as it was emotional. After all, the first and great commandment teaches us to love God with all our hearts, soul, and MIND (Matt 22:37).” Instead of thought, contemporary songs can become “vehicles of passion” with simple repetition designed to elicit an emotional response devoid of thought, intellect, doctrine. (MacArthur in Christian Research Journal vol 23 no 2). Lutheran hymns support Lutheran theology, one of the greatest disservices of praise music is not in the teaching of error. Rather, because it often comes from a non-Lutheran understanding, praise music is devoid of Sacramental theology. Empty calories!

You may find all these by looking at our Regular Column on the Explanation of the Divine Service category or by using the shortcut https://steadfastlutherans.org/liturgy.

These notes were originally written in 2001 by Pastor David Oberdieck and have been edited. Thanks to Pastor Mathey for improvements to this segment.