(Rev. Simcak writes on behalf of the Texas Confessional Lutherans. His posts can be found on the Regular Columns page of the website.)

The HOUSTON CHRONICLE has reported that a new translation of the New Testament has been completed and is now available for $34.99! It is a new way of presenting Scripture that “speaks to modern sensibilities, to modern ways of processing information.” 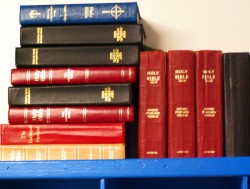 David Capes, a professor at Houston Baptist University and Chris Seay, pastor of Ecclesia Church, a non denominational church, in Houston, put together a team of more than 80 writers, scholars and songwriters.

I can hardly wait to receive a translation which utilizes the talents of a songwriter! A songwriter was added because Capes relishes the recent comment by Rolling Stones guitarist Keith Richards, “I read the Bible sometimes, but I find it deadly boring.” It is a known fact that most songwriters are very proficient in both Hebrew and Greek (sarcasm intended).

The new translation is titled “The Voice.” It has already been released by Thomas Nelson,, the Nashville Christian publishing house. The goal is to release the Old Testament by fall 2010.

Capes pontificated, “There are great translations out there, but we live in a new day, with a new audience. This is meant to address that audience.” It certainly is a new day with a new audience. But the problem for all days and all audiences, new and old, remains the same: sin and grace. That has not changed since the fall into sin and the suffering, death, and resurrection of Jesus, the Christ, to give us full and free forgiveness of our sins and the certain guaranteed hope of eternal life solely because of what Jesus has done for us!.

David Capes observes that “about 20 million Christians participate in alternative Christian communities – they meet in theaters and storefronts instead of traditional sanctuaries and they approach worship differently. They have a different way of thinking about these things spiritually.” While his observation is probably correct, it behooves us to cling to translations that correctly translate God’s Word from the original Hebrew and Greek.

The article mentions that Lutherans also participated in the translation. Let us warn our members about “new translations.” Let’s continue to test any translation by its faithfulness to the original Hebrew and Greek and its complete proclaiming in both testaments of the central doctrine of Christianity: justification by grace for Christ’s sake through faith.