This final Walther Conference blog is a little late but alas, my first priority is the congregation that has called me to bring them the Gospel. I made the four hour drive back from St. Louis to Naperville yesterday afternoon so that I could preach the first of our four weekend services Saturday night. After that there was also the matter of finishing up Bible class for Sunday morning. So after a nice Sunday afternoon “pastor’s nap” (the Bears game for me really was a sleeper), and attention to some chores around the house, I have time to wrap up my comments from St. Louis. Once again, thanks to all at the conference for your good wishes on the success of the Brothers of John the Steadfast. The last presentation was possibly the finest of the conference. It was delivered by the Rev. Matt Harrison. 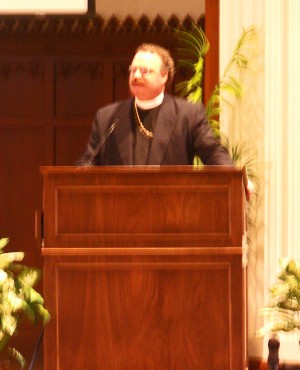 In an attempt to capture both the failings and the promise of the LCMS at the dawn of a new millennium, Reverend Harrison concluded his presentation with a stirring proclamation that the LCMS is still “the best thing going.” There is no denying that in the last few years the LCMS has moved far away from the church that Walther and others founded 160 years ago. Harrison made that clear, but in a strong note of optimism for the future he also asserted that the listing good ship LCMS can be righted.

In 1866 C. F. W. Walther wrote a paper stating that the Evangelical Lutheran Church is the true visible church of God on earth. That seems like a bold statement but that is how convinced Walther was that Evangelical Lutheranism, based on the Confessions, was true to God’s word. Rev. Harrison was not making the 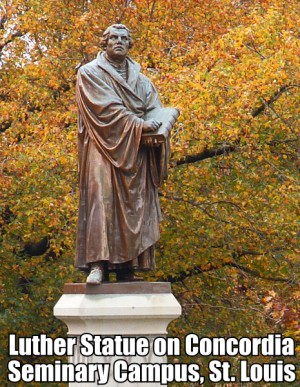 exact same point but one cannot help but see the similarity. Harrison was bold to judge in this age of tolerance and compromise that the LCMS may not be perfect but as denominations go “it is the best thing going” across the globe. He certainly knows Lutheranism around the world. He has spent the last several years criss-crossing the globe with the message of the cross and meeting Lutherans of every tribe and nation. It was refreshing to hear someone defend the traditional doctrine and practice of the LCMS in the face of all the bureaucratic efforts of recent years to remake the LCMS in the form of protestant America.

It is Harrison’s work as the Executive Director of LCMS world relief and human care that has taken him to every corner of the globe and has led him to the conclusion that the LCMS at its best, is a beacon of doctrinal strength for Lutherans around the world. I can personally attest to this. Our own congregation has entertained Lutheran leaders from Madagascar, Siberia, Kenya and Sudan and they all speak of the LCMS has a bulwark of strength for them as they try to battle the liberalizing tendencies of the Lutheran World Federation and other liberal Lutheran institutions. (Most of these contacts at Bethany Naperville have come to us through the fine work of the Lutheran Heritage Society or Dr. Tim Quill at the Fort Wayne Seminary.) The LCMS has a chance to make further headway in these locations and many others if we remain true to the confessions.

The LCMS has not been at its best recently as Harrison’s paper “It’s Time” declares. But as he states in that paper, with repentance from all corners of the synod and a recommitment to pure doctrine, this synod can shine again as it did in Walther’s day. 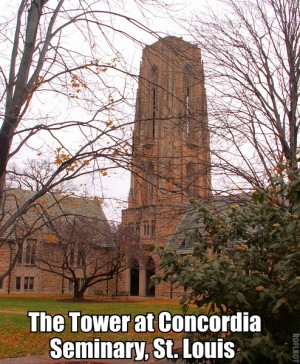 It was refreshing to see a bureaucrat who  is also a theologian. Harrison demonstrated his scholarship throughout the presentation with a deft treatment of Walther’s view of the unity of synod. He mixed into his presentation slides of his recent trip to Germany including pictures of the church where Walther was baptized and the barn where Walther did chores as a child.

Harrison not only criticized the church growth crowd for neglecting doctrine, he also criticized conservatives for neglecting missions for the sake of doctrine. It was a powerful line when he said “being doctrinal is being missional” and “being missional is being doctrinal.” Personally I would replace the ambiguous word “missional” with the phrase “doing missions” so that we do not get lost in the ambiguous, non-fleshed out world of concepts, as Dr. Nagel would say, but none the less, the point is still poignant.

Harrison’s presentation was well received by the group. It got the longest ovation from the conference-goers, some of them even standing as they applauded. Harrison was doctrinal, pastoral, missions-minded and demonstrated courageous leadership by holding out hope for the denomination that is the “best thing going.”

The Rev. Dr. Timothy A. Rossow