I am not sure what has been better, the presentations by top notch theologians or meeting several Brothers of John the Steadfast. Among the presenters was Pastor Todd Wilken, host of Issues, Etc., a program with which the Brothers are very familiar. In his address Todd asked what it would be like for C. F. W. Walther to return today to the church he founded. Wilken said that we do not need to speculate on that matter because Walther’s critique of the Methodism, new measures, and revivalism of his own day are eerily similar to what is going on today, only now, it is happening in his own synod. Walther would be appalled.

But all is not gloom, doom and tired out “old” new measures. Pastor Wilken ended with an inspiring summary of the good things Walther would see in the church today such as the most Lutheran hymnal Lutheranism has ever seen (LSB), the new CPH devotional tool – “A Daily Treasury of Prayer,” and lay people actually owning copies of and reading the Book of Concord, to name a few.

By the way, I was able to stop by the Issues, Etc. studio on the way to the conference and snap some pictures and spend some time with Todd and his producer Jeff Scwharz – more on that next week. 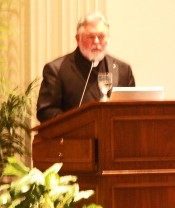 Another great theologian with a BJS connection, Fred Baue, the editor of our Steadfast Quarterly, spoke in the afternoon on Walther’s clear teaching of the six day creation. Actually, Baue asserted, it was a seven day creation. Focusing on that seventh day of rest gave Baue the opportunity to talk about Walther’s love for the liturgy and his clear teaching from Scripture and the Book of Concord that our worship of the Almighty Creator is to remain steady and unchanging through the generations.

The presentations were great but the real thrill of the day was meeting all of the BJS readers who were at the conference. Mark Dowell, one of the folks on our Confessions Reading Group ticker, thanked me for this website and said he would not have even known about the conference were it not for our announcement. Dr. Jack Middendorf drove all the way from Omaha. He thought he might get to meet Mollie at the conference but then he remembered that she had said she was going to be in Hawaii. I also got to meet Dr. David Berger, the seminary librarian and courageous supporter of confessional Lutheranism. I delivered to him copies of the Steadfast Quarterly and he will now be displaying it alongside all the other periodicals in the library. I got to have dinner with Brother of John the Steadfast Ed Dippold and his wife who are from Village Lutheran Church in Ladue, Missouri and some nice folks from Normal, Illinois (what a great place for Lutherans to be from) and St. Paul Lutheran Church in Des Peres, Missouri, to mention a few.

I finally got to meet the Rev. Dr. Matt Harrison. My impression was that he is a strongly confident, humble man. I was very impressed with his grace and humility. When I asked him what he thought about all the buzz suggesting he might be a good synod president someday, he humbly shrugged his shoulders and changed the subject, mentioning how busy he was with his work in human care. The other people I talked to at the conference had a different reaction to the matter. They are quite enthused about having a leader in our synod who writes papers such as “It’s Time.” I am looking forward to Dr. Harrison’s presentation later this morning.