My wife Phyllis and I are out in the Pacific Northwest for a few days to celebrate my mother-in-law’s 90th birthday on Sunday. We are taking advantage of the trip to connect withsome of the Brothers of John the Steadfast out in Seattle. Particularly we are meeting with Scott Diekman and Jim Pierce. 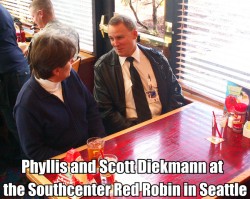 Yesterday we had lunch with Scott Diekmann from Puyallup, Washington a suburb about forty-five minutes south of Seattle. Scott is known to many of you as the editor and writer of Standfirm. Scott is a wonderful example of an LCMS layman who takes doctrine seriously. His area of expertise is apologetics (the defense of the faith) and he is currently working on a critique of the new Emergent translation of the Bible.

Scott’s everyday vocation is airline pilot. He is currently flying for Alaska Airlines out of Sea-Tac airport. He grew up in Nebraska and has lived in various locales around the country. His years in Utah led to his interest in apologetics as he looked for ways to defend the faith against the falsehoods of Mormonism. He is a wonderful example of what the Brothers of John the Steadfast is trying to do.

There are a lot of problems in our synod today. One of the biggest problems is that the institutional church is no longer interested in the purity of doctrine, the chief duty of the church according to Walther. An educated laity is one of the best hopes that we have to address this lack of doctrinal supervision. It was the laity that bailed out the synod in the 1970’s when we went through the battle for the Bible. If we can raise up more men (and women) like Scott, we can win this new battle, the struggle for supervision.

Speaking of more men like Scott, on Thursday we will worship with Jim Pierce, another one of the Brothers, at Messiah Lutheran Church in Seattle and then on Monday we are having coffee with Jim and Scott at the original Starbucks, across the street from Seattle’s famous Pike’s Place Market. Like Scott Jim has an interesting history. We also hope to connect with Pastor Onken and his confessional congregation in Marysville, Washington. More on these Northwest confessionals next week. Any others I am missing in the Seattle area – email me by clicking here.

One of the other goals of the Brothers of John the Steadfast is to encourage men to support their pastor. One of the reasons that pastors need support is that the call typically takes them away from their blood family. Of course their congregation is their new and better family in the  blood of Christ as Jesus teaches (Matthew 12:48), but none the less, there can be a lot of homesickness for the pastor and his family. This is the first time in over twenty years that the Rossow family will have Thanksgiving with our blood relatives. We are really looking forward to it. Be kind to your pastor Brothers. For sure, show him the tough love of holding him accountable to the office of supervision that he has been given, but also be kind by making sure the congregation understands the difficulties of wearing the yoke of Christ.

BTW – Happy birthday Esther! You are the most energetic 90 year old I know and also a great mother-in-law.