(One of the goals of Brothers of John the Steadfast is to train the Brothers in good practice and theology. This article is one in a series that teaches about the liturgy.

These articles were initially intended to be put into bulletins or read during the service to educate the laity on the different parts of the service. They were therefore purposefully made short. Thanks to Pr. Mathey for helping to enhance this reading. Please use the comment section or email us to help us expand the series as appropriate.)

Notes on the Liturgy #4 – Absolution 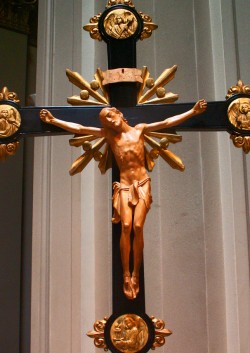 Last Sunday we looked at Confession. Its counterpart is Absolution. Confession and Absolution is the first completion of what will be a constant flow of Law & Gospel throughout the service. In Confession, God’s Law has shown us our sins, and in response to our repentance we experience the first proclamation of the sweet Gospel in Absolution. The pastor says, “…in the stead and by the command of my Lord Jesus Christ I forgive you all your sins in the name of the Father and of the Son and of the Holy Spirit.” Absolution is a gift from God that Christians should cherish because it is the Gospel of forgiveness applied to a specific individual even when proclaimed in the corporate setting of the liturgy. Absolution is for all repentant sinners whatever their sin. It is particularly comforting for terrified consciences because when we are absolved we are truly forgiven before God and in His eyes it is as though those sins had never been committed.

In the words of Absolution the minster says, “I forgive” because Christ commanded His disciples saying, “If you forgive anyone his sins, they are forgiven; if you do not forgive them, they are not forgiven. (John 20:22)” The pastor says “I” because Christ said “you.” In fact, most rites of Individual Confession & Absolution pose the question to the penitent: “Do you believe that my forgiveness is God’s forgiveness?” But we must never understand the Word of Absolution as merely a human word. The Lutheran Confessions speak of absolution this way, “…it is not the voice or word of the person speaking it, but it is the Word of God, who forgives sin. For it is spoken in God’s stead and by God’s command (Augsburg Confession xxv).” The confessions go on to say, “Therefore we must believe the voice of the one absolving no less than we would believe a voice from heaven. (Apology of the Augsburg Confession XII). “During the Absolution, the pastor is standing before the Lord’s people as a mouthpiece of God, Himself. The pastor is merely a vocal instrument that the Lord is using to proclaim His forgiveness, grace and mercy to His people. And that man is there with the full authority of the Office of the Keys which is why these words are often included “…I, by virtue of my Office as a called and ordained servant of Christ,…” Those words serve as a further assurance that this poor miserable sinner who dares to stand in as the Lord’s ambassador has the full authority granted to him by God and His Church.

These notes were originally written in 2001 by Pastor David Oberdieck and have been edited. Thanks for Pr. Mathey for helping to enhance this article.