(Editor’s Note: Early on this website has included much in the way of theological critique. Our goal is to not only teach the Brothers (and others) how to critique bad theology and practice but to also proactively train the Brothers in good practice and theology and so we will be offering more columns such as this new one that teaches about the liturgy. This is the second in a twenty two part series. We thank Pastor David Oberdieck for letting us use it. We cannot say everything about every part of the liturgy in this series so if you think there are significant things left unsaid please use the comment section to help grow the Brothers.

These were initially intended to be put into bulletins or read at the start or end of the service to educate the laity on the different parts of the service. As we develop them we hope to put them in a form that can be used in that manner, or inserted into newsletters or other methods of distribution.)

Notes on the Liturgy #2 — THE INVOCATION 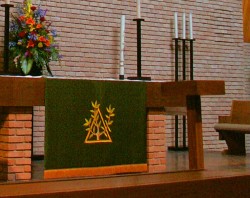 There are three significant elements in regard to the invocation. First, when the pastor calls out, “In the name of the Father, and of the Son and of the Holy Spirit,” it acts as a simple creed. We are confessing whom we believe the one true God is. We worship the Trinity and none other. When outsiders come to the  Divine Service, if they are paying attention, they will realize that  the people they are with are worshipping the Triune God. We are clear right up front, in whose name we gather and who we are worshipping.

Second, in the Invocation, we are asking for and acknowledging God’s presence in the service. “For where two or three come together in my name, there am I with them.” (Matt 18:20 NIV)

Finally, it is significant that the Invocation is accompanied by the sign of the cross. We received both the name of the Trinity and the sign of the cross at Baptism. We received the name of the Trinity by divine command. Since Baptism gives us the benefits of the cross, the sign of the cross was placed upon us according to the tradition of the catholic church. This then should be a reminder to us that God, who washed us and claimed us in Baptism, is the one who has brought us into the worshiping community. “We do not come as those who deserve to come because of what we have done.” We come because He has called us through the Holy Spirit in the water and Word of Baptism.

These notes were originally written in 2001 by Pastor David Oberdieck and have been edited.