Are you a sheep or a goat? You will be one or the other, you know. When? When Christ comes again. Listen again to today’s Gospel reading: “When the Son of Man comes in his glory, and all the angels with him, then he will sit on his glorious throne. Before him will be gathered all the nations, and he will separate people one from another as a shepherd separates the sheep from the goats. And he will place the sheep on his right, but the goats on the left.” Dear friends, you and I will be there when this happens, either among the sheep or among the goats. So it’s important that we listen today and learn about “The Sheep and the Goats.”

First of all, the truth is, there will be this separation of the sheep and the goats. There will be a judgment day. A lot of people don’t want to hear that. They don’t want to consider the prospect of a final day of reckoning that will include them. But their denial will not change the reality of it. The fact is, Judgment Day is coming. Jesus is coming again–the Son of Man will come in his glory–and he will sit on his throne as the royal Judge of all. We confess that in our creeds, don’t we? All three ecumenical creeds–the Apostles’, the Nicene, and the Athanasian–all of them state that Christ will come “to judge the living and the dead.” 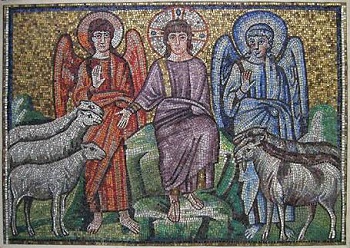 And in this judgment of all people, there will be a separation: “He will place the sheep on his right, but the goats on his left.” Notice that there is no middle ground–there is the right, and there is the left, and that’s it. There are sheep, and there are goats, but there are no hybrids. No “shoats” or “geep,” just sheep and goats. No goats in sheep’s clothing, either. All the masks come off. The truth comes out. There is no more pretending and play-acting. Sheep are revealed as sheep, goats are revealed as goats. That’s not always so immediately apparent in this life. But it will be then.

And it will make a difference whether you are a sheep or a goat. Their destinations will be different. To the goats, to those on his left, the King will say, “Depart from me, you cursed, into the eternal fire prepared for the devil and his angels.” And “these will go away into eternal punishment.” So if you want to deny the existence of hell, then you are arguing with Jesus, because he taught it. The reality of hell is as well established in the Scriptures as the reality of heaven. If you’re going to deny the one, then you might as well deny them both. But that won’t change what’s going to happen. All people are going to either one or the other.

The goats go away to eternal punishment, eternal fire. But the sheep, the righteous ones on the King’s right, will come into eternal life. They will inherit a kingdom. This is the blessed reality of heaven, being at home with the Lord forever. Much better to go to graze with the sheep than to go to blazes with the goats! Your final destination is going to last a long time. But know for a fact that it will be one or the other. There will be a judgment day, with an eternal separation.

Did you know that this is the consistent teaching of Scripture–judgment according to works? For example, earlier in Matthew’s gospel, Jesus says, “The Son of Man is going to come with his angels in the glory of his Father, and then he will repay each person according to what he has done.” St. Paul teaches likewise. In 2 Corinthians, he writes, “We must all appear before the judgment seat of Christ, so that each one may receive what is due for what he has done in the body, whether good or evil.” In the last chapter of Revelation, Jesus says, “Behold, I am coming soon, bringing my recompense with me, to repay everyone for what he has done.”

And so the church teaches and confesses this doctrine of judgment according to works. The Athanasian Creed, after the familiar line about Christ coming again to judge the living and the dead, goes on to say: “At His coming all people will rise again with their bodies and give an account concerning their own deeds. And those who have done good will enter into eternal life, and those who have done evil into eternal fire.” This then is our church’s teaching–judgment according to works. Good works done will be cited as evidence when the righteous are rewarded. Good works not done likewise will be cited as evidence when those on the left are told to depart.

So our first two points about the sheep and the goats are these: First, there will be a judgment, a separation. And second, this judgment will be according to works. Then the third point: It is only faith in Christ that can produce the good works that righteous sheep do. Notice what the King says when he commends their good deeds, “I was hungry and you gave me food, I was thirsty and you gave me drink,” and so on. “Truly, I say to you, as you did it to one of the least of these my brothers, you did it to me.” Everything is centered on the person of the King. If the work is done in connection with Christ, then it is regarded as a good work. If there is no connection with Christ, then there are no good works. You must be linked to Christ and his goodness–that divine, righteous goodness by which we sinners are accounted as good–in order for there to be any good works to speak of. Faith in Christ is the key as to whether your works will be judged as good or not.

So in the final analysis, it is faith that saves, faith in Christ. Faith alone, apart from works. Our works do not, in the slightest degree, merit our salvation. It is a free gift, pure grace. Only Jesus Christ and his work can earn our salvation for us. Jesus died on the cross to wipe the slate clean for us. His precious blood washes away our unfavorable record of sins. Those sins will not be brought forward when the books are opened. Christ’s righteousness is bestowed on us as a gift. His perfect holiness purifies our imperfect works, so they are then regarded as good works for his sake. Christ remembers only the good that we have done. And he sees in our poor little deeds of mercy, which we ourselves would never dare to plead, our Yes to him.

So how do we understand this relationship of faith and works when it comes to the judgment? Faith alone saves, but the faith that saves is never alone. It is always accompanied by works. Saving faith will produce good works. So the works are the evidence, the proof, that a living faith was indeed present in the believer. Faith works. Like a good tree, it will bear good fruit.

When the Lutheran reformers presented their Augsburg Confession, which taught justification by grace through faith, their opponents brought against them Scripture passages like our text today, which speak of judgment according to works. How did the Lutherans respond? Like this, from the Apology of the Augsburg Confession: “In these and all similar passages where works are praised in the Scriptures, it is necessary to understand not only outward works, but also the faith of the heart. . . . When eternal life is granted to works, it is granted to those who have been justified. Only justified people, who are led by the Spirit of Christ, can do good works. Without faith and Christ as Mediator, good works do not please God. . . . ‘You gave me food’ is cited as the fruit and evidence of the righteousness of the heart and of faith. . . . In this way Scripture lumps together the righteousness of the heart and its fruit.”

So do not look to your works to save you. Notice that the righteous, the sheep, are kind of surprised when their good works are mentioned: “Lord, when did we see you,” etc. You see, they weren’t busy keeping score and tabulating their brownie points as they went through life. Instead, their good works are cited to show that they did indeed have a living faith that was connected to Christ. And so faith in Christ will produce good works toward the neighbor.

The righteous do not look to their own works. They look to the finished work of Christ, who alone can produce works that are accounted as good before God. The key thing is to be connected to Christ. And that comes only through the gospel, the good news of sins forgiven by the cleansing blood of Christ, shed on the cross. That’s the only way your bad record–all the bad things you did and all the good things you failed to do–that’s the only way your bad record can be erased and then replaced with works that are considered good for the sake of God’s own Son, Jesus Christ our Lord.

This is the good news I bring to you today: God has forgiven you for the sake of Jesus! Jesus is your righteousness! Jesus is your life! Your eternal life. Life that overcomes the grave, even as Jesus rose from the dead on the third day. Life that will stand in the Day of Judgment, for your Judge is also your Savior!

All of this is a gift, dependent on the goodness of the Giver: “Come, you who are blessed by my Father, inherit the kingdom prepared for you from the foundation of the world.” See, it is all God’s doing. He is the one who blesses you, who puts you in line for an inheritance. He prepared his heavenly kingdom for you before you could do anything about it. So this text of ours today, which on the surface might seem like we have to pile up our works in order to merit salvation, is instead a most comforting passage of salvation by grace.

The clouds of judgment gather. The day is surely drawing near. Christ is surely coming. Judgment Day is coming, and you will appear before the throne of the King to receive what is coming to you. By God’s grace only your works done from faith in Christ will be mentioned, the evidence of a genuine and living faith. By God’s grace you will receive the reward of the righteous–eternal life in his kingdom. Dear Christian, God in his grace has made you one of his sheep. Now follow your Good Shepherd in faith, and do the good works God has prepared for you to do. And you will receive the eternal kingdom God has prepared for you, as well.